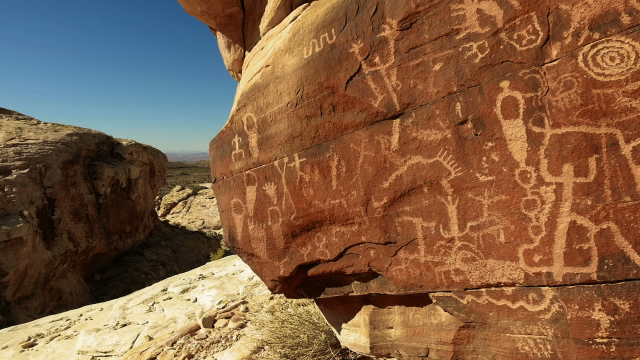 President Obama set aside more than 550 million acres of federal land under 'national monument protection'. Many cheered the move, but disgruntled residents say the state should control their own land.

While rock carvings, or petroglyphs, have been found all over the world and in other parts of the southwest, the concentration and artistry of those found at Gold Butte in Nevada's Mojave desert has earned them National Monument status. "I think of the artist who did this as perhaps the Michelangelo of his day", explains Jim Boone, member of 'Friends of Gold Butte', in reference to one particular drawing. Whilst the decision to preserve this site is popular amongst Nevada's voters, the inclusion of 300,000 surrounding acres has proved more divisive, amid fears that the designation will restrict usage. Former Representative to Nevada, Cresent Hardy, worries for future accessibility to the land: "It is public lands right now, and it's public lands for the use of me, my children, other people". These concerns come among broader tensions over control of federally owned land, which many believe should be controlled at state level. This is an especial concern in Nevada, which is 85 per cent federally owned. "Give us the money that you spend out there across the country on every state, and let us manage our land", Hardy argues.
FULL SYNOPSIS
TRANSCRIPT