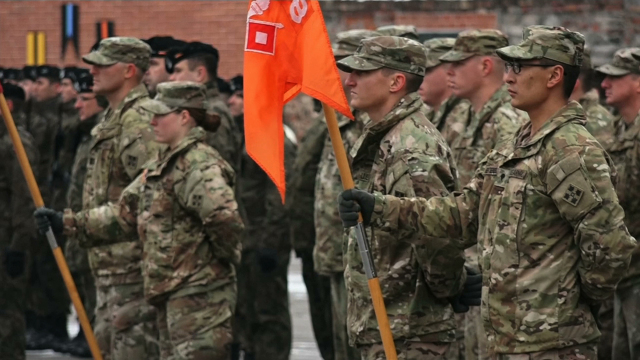 This January saw the largest deployment of American troops to Europe since the end of the cold war. But President Trump has expressed his scepticism for NATO, an organisation he has described as "obsolete".

Organised by the Obama administration, the move is a demonstration of support for NATO allies in Eastern Europe, as well as a preparation for potential Russian aggression. The dispatch is a secondary measure, following the imposition of international sanctions after Russia's annexation of Crimea. This PBS short follows a group of American soldiers travelling to Poland, where they will begin a nine month rotation of American military presence in the countries neighbouring Russia. Polish major general Jaroslaw Mika comments "it is important for security, not merely for Poland...for Europe, and for all the world". US major general Tim McGuire states, "I'm very proud that we're a member of NATO", but under President Trump it is unclear what the future holds for the organisation.
FULL SYNOPSIS
TRANSCRIPT