Fleeing ICE clampdowns and the rising right, immigrants cross the border to Canada 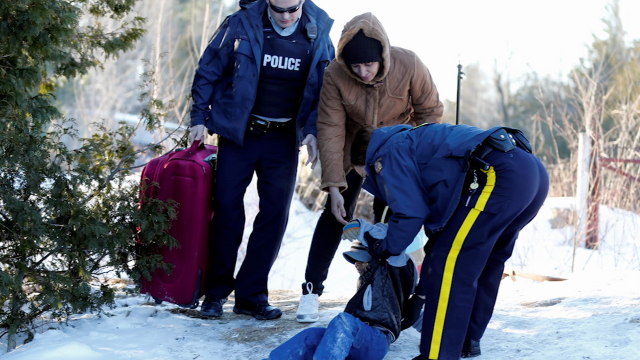 There's been a surge of immigrants from the United States into Canada since the start of the Trump Administration, with the president's promise of a crackdown on undocumented immigration and attempted travel bans.

Much of the border is unmanned, and the town of Emerson has become an immigration hot-spot. Mayor Greg Janzen is worried about security as a result: "we're not punishing anyone for breaking the law, so our border right now is at risk of becoming a joke". A legal loophole allows migrants who sneak into Canada to apply for asylum there, despite starting the process in the US. This fact annoys some locals. "If they were already settled in the States why can't they go back to the States?", says Dale Pelkie. But asylum seekers face deportation if they return to America, and grave danger back home. "If I go back to Somalia I wont stand a chance there, I would be killed", says Nasra.
FULL SYNOPSIS
TRANSCRIPT