A haunting true-crime mystery in the misty Galician hills 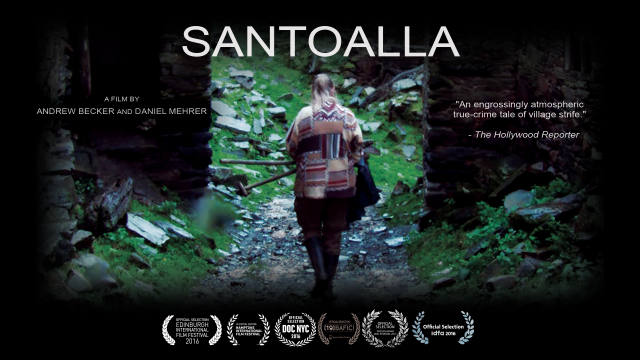 The crumbling village of Santoalla in the misty Galician hills provides the unlikely setting for this haunting true-crime mystery. Progressive Dutch couple Martin Verfondern and Margo Pool moved to Santoalla in search of a simple life away from the city, but their dream to live off the land instead ignited a decade-long conflict with their rural neighbours. These tensions eventually culminated in a shocking crime which would take years to solve. 'An engrossingly atmospheric true-crime tale of village strife' - Hollywood Reporter Our Spanish-speaking customers can watch Santoalla on Vimeo or Amazon Prime Video.

Andrew Becker is a director, producer, cinematographer, editor and composer residing in Brooklyn, New York. Since 2008, he has worked primarily in television, creating content for cable outlets such as Discovery, Travel Channel and A&E.

Becker also records music under the name, “Human Potential”, and has released two solo albums on his label, What Delicate Recordings.

Daniel Mehrer is a Brooklyn, New York based director, producer, cinematographer and photographer. He has produced both long and short form content for various cable outlets such as Discovery, OWN and MSNBC.

When we set out to make this film, we were initially intrigued by the bizarre circumstances surrounding Martin Verfondern’s disappearance, as well as the decision made by his wife, Margo, to continue living in a nearly abandoned village with the family that she believed was responsible. In our minds, SANTOALLA existed simply as a crime story. However, after living in the village for months at a time, we uncovered the roots of the dispute that existed between the two families. While the Rodriguez family revered the pueblo as a place that preserved centuries-old customs and traditions, Martin and Margo envisioned their adopted home as a location to build their own utopia and foster their progressive ideals. Despite their mutual love for the village, neither side accepted the other’s concept of what Santoalla should be. That’s when we knew that the film was about more than just a disappearance. The catalyst that sets the film in motion is as old as time—leaving one's home to find a better life in a foreign land. Through Margo’s journey, the film considers the importance of understanding and tolerance in an increasingly borderless world, and examines the very essence of the word, "home".