Evaluating the Clintons' most notorious scandals 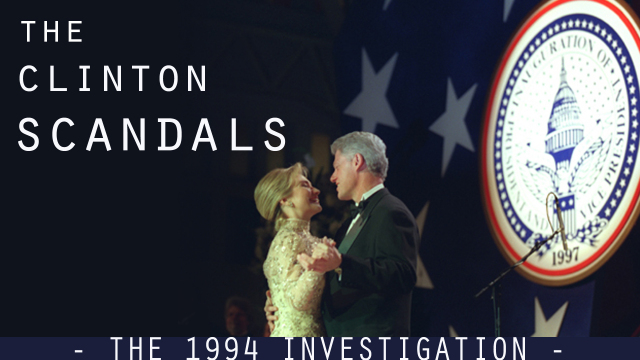 This 1998 doc examines the less salubrious dealings of one of America's top power couples. Having been on the political field for decades, they certainly have much to hide - but how damaging are these covert goings-on?

Since entering the political scene in 1978 the Clintons have dodged allegations of corruption. From Hillary's success on cattle futures, to Whitewater, to knowledge of arms and drug running. Floyd Brown saw in the 1980s Arkansas administration, "a small group of cronies running the state for their own personal, political, and financial gain", with the Clintons and the Arkansas Development Fund Authority at its heart. ADFA was the Clintons' 'piggy bank', says trader Roy Drew, used to peddle influence.
From the off Hillary's business decisions have raised suspicions. From rumours of the ill-fated Whitewater Corporation funnelling funds into the Clintons' campaigns, to her miraculous returns on cattle futures trading - which saw her turn $1,000 into $100,000 in just ten months. While she faced the press in the 1990s in an attempt to explain away the allegations, they have persisted to this day.
It was said that the Clintons learnt not to take on big business from Bill's 1980 governor election failure. It was a lesson they took to heart - courting Arkansas' most powerful business people. "The way the state has been set up. It is almost like a rigged card game", says Roy Drew. Former ADFA marketing director Larry Nichols described how he found himself "in the middle of the good ol' boy political machine that has been around Arkansas for over a hundred years. This was the epicentre".
After thirty years of suspicion and whisperings about her integrity, can Hillary's campaign survive another leak, and another FBI investigation? Produced by ABC Australia
FULL SYNOPSIS