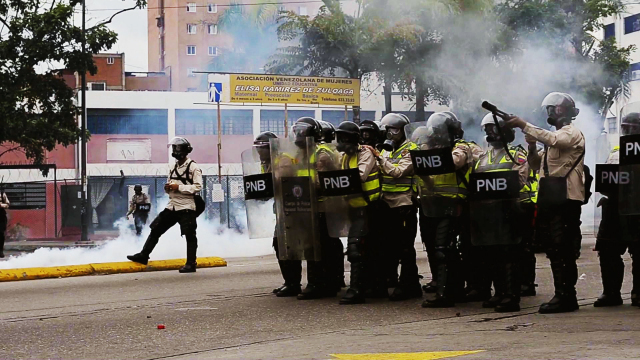 The cracks are showing in Venezuela's enduring Socialist regime. Mass protests on the streets are met with tear gas and rubber bullets - but those in charge are unwilling to give into the opposition's demands.

The youth are the driving force of the uprising - they feel cheated by the socialist government. "I cannot report anything good from my experience, and I am now 24 years old. The Venezuelan people are humiliated", says Rafaela Requesens, a student representative. "The government says: 'everything is in order'. But that's not true. We all suffer from the corruption", she tells us. Four years after the death of Hugo Chavez, who championed Socialism in Venezuela, the system he created is crumbling. Despite boasting the world's largest oil reserves, the country can barely afford to feed its people. Mismanagement, corruption, and falling oil prices have led to a national catastrophe, with crime rates soaring and basic needs in short supply. People are now calling for action; among them is Miguel Pizarro, a 28-year-old opposition politician. "We are fighting on the streets and calling for elections and the recognition of the elected parliament. There must be enough food and medical care so that no one dies because of shortages." But as the government refuses to cede to demands, the situation remains tense and the country on edge.
FULL SYNOPSIS
TRANSCRIPT