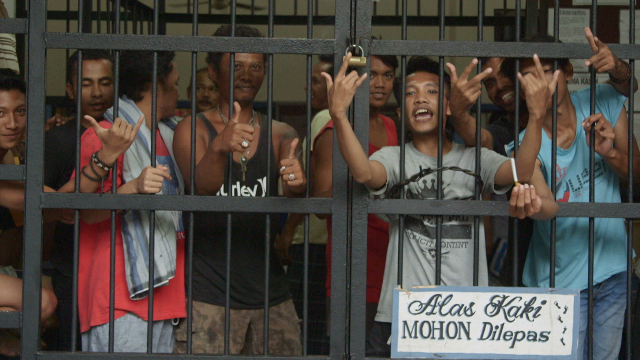 For the first time a TV crew has obtained virtually unrestricted access to all corners of Kerobokan's men's prison. ABC Foreign Correspondent reports from this repository of misery set in an island playground.

"Almost as well-known as Bali's beaches is Kerobokan jail, four hectares behind razor wire in the centre of this tourist mecca", reports Foreign Correspondent's Samantha Hawley. Opened in 1979, the prison's capacity is officially 323 inmates, but it currently houses over four times that figure at 1,378, according to government data. But within the cramped confinement of the cells, Hawley discovers a community spirit, between inmates and guards alike. For Matthew Norman, one of the 'Bali Nine' drug trafficking circle, keeping busy is key. He manages the art studio within the jail. "We're not locked up in a cell 24 hours a day. . . I do believe prisoners can chnge. It's bettering yourself so that you can go back outside". The prison staff appear to share that open-mindedness. Wayan Mudastra is the longest serving guard at Kerobokan. With 1 guard for every 160 inmates, Mudastra is keenly aware of the strain created by overcrowding. Despite this he champions the inmates' right to escape the squalor and roam outside. "As a human being, why shouldn't you be allowed to look at the sky? If we can see the sky we can broaden our perspective." Master available soon
FULL SYNOPSIS
TRANSCRIPT