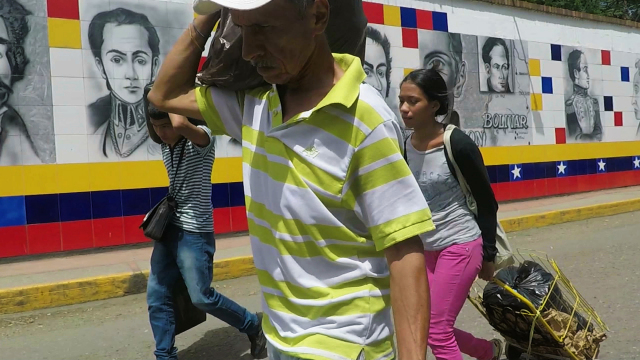 After months of social unrest, Venezuela teeters on the brink of collapse. Thousands are now fleeing into neighbouring Colombia in search of better prospects - but no easy life awaits them.

"It's difficult," Luisa Gomez says, "so many Venezuelans have arrived." Since arriving two months ago, Luisa tries to support herself and her children by selling toothbrushes on buses. Despite temporary rent-free accommodation provided by church-members, she still struggles to make ends meet. "I don't even have 35 dollars to pay for the gas, how am I going to pay for rent? I don't know what I'm going to do." As the migrants receive limited support from the Colombian government, voluntary groups are stepping in to provide assistance. "There is already a significant number of people with very specific needs, for whom the state is doing nothing," complains Father Francesco Bortignon, who runs a Catholic mission providing meals and workshops for migrants. "The only ones doing anything are us humanitarian organizations," he states. As the situation in Venezuela continues to deteriorate, Colombian authorities are beginning to worry. "We don't know how many people we'll be able to receive," says Cesar Rojas, mayor of Cucúta, which lies on the border. "If there's a coup d'etat, we'll be on the alert."
FULL SYNOPSIS
TRANSCRIPT