Corruption at the heart of Indonesian politics 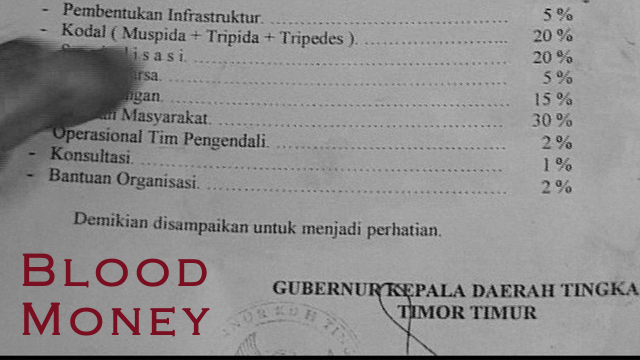 With new evidence direct from militias, civil servants and Government files, this exceptional investigative doc traces Timor’s war criminals to the heart of the Indonesian government and reveals for the first time how funds from International donors came to bankroll the militia’s campaign of terror.

In his first TV interview, intelligence defector Thomas Gonsalves, Indonesia’s closest friend in Timor for 24 years, describes how senior Ministers channelled funds to establish the militias. In private meetings the Minister for Transmigration pledged “funds” and "all sorts of guns and troops.” He then witnessed the Minster ordering that the entire Transmigration budget in Timor be used for the militias. Gonsalves’ evidence exposes ministers to possible criminal prosecution and rubbishes the focus of inquiries to date: that rogue Indonesian Army Generals were the architects of the violence acting without the behest of Government. Yet Gonsalves’s evidence is just the beginning. Amongst a sea of papers in the ransacked offices of district governors, lies the proof of wider Government complicity. With help from the civil servants who administered the flow of money we retrieve documents confirming that funding for ‘the socialisation of autonomy’ – open code for propaganda and militia activities - was coming from many Government departments, including the Foreign Affairs Ministry itself. Rui Lopez, another high level Indonesian Intelligence connection reveals that a staggering 17 billion rupiah came direct from them to set up the FDPK – the first pro-autonomy party. In an uncomfortable interview Ali Alatas is forced to admit that the money did change hands, although “not for the militia…for general information perhaps.” The FDPK's ‘information campaign’ began with the killing of 200 people, nearly all of them mutilated as a warning to others. In addition this programme reveals a scandalous scam that saw over £4.5 million worth of International donor money diverted by Indonesian Ministers to fund Timor’s militias. Indonesia was broke by the close of its financial year in March, there was no money left for the pro-autonomy campaign with still 5 months to go to the referendum. The fiscal solution arrived in the form of a World Bank general budget loan – a loan intended to stabilise Indonesia's economy to “shield the poor”. A memo from Timor’s Governor details how the militias would be paid from welfare funds, funds fed by the Indonesian Government with World Bank dollars. The entire 1999 welfare budget for East Timor was cashed up as blood money. “For each person you killed you got 3 million rupiah,” explains a Maliana militia fighter. The strategic direction to Thomas Gonsalves was chillingly clear: “we were to liquidate all CNRT members, down to their grandchildren. If the people sought help from priests, nuns or the bishop, these too should be killed.” The World Bank may not be responsible for frauds and abuses enacted by the governments they assist, unless they know the fraud is happening, and in this case they did know. In a candid interview the World Bank’s #2 in Jakarta Ben Fisher, explains that the Bank received leaked documents revealing how welfare and development funds were going to be diverted. Yet after reassurances from Indonesia that the funds would not land in gunmen’s pockets, the Bank took no further action. They proceeded to transfer a US$500 million loan. And although the Bank had a billion-dollars worth of political leverage in the form of future loans to Indonesia they chose not to push them further on Timor. “Should we penalise school children in Sulawesi because of what’s happening in another part of Indonesia?” Fisher reasoned. And so in Timor today the campaign for justice rests on the shoulders of the militia rank and file. “We are not educated people” they plead, “we’re farmers, we were scared so we joined.” No doubt these men will receive their punishments. The question now is whether their military commanders or ministerial paymasters will come to stand in the dock alongside them. Produced by Hobo Media
FULL SYNOPSIS
TRANSCRIPT