My Life Without Air

How much can you fit between two breaths? 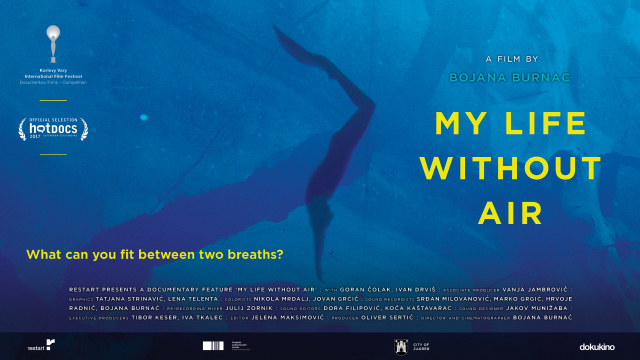 Free-diver Goran Colak has dedicated his life to surviving devoid of oxygen. Driven by a desire to be the best in the world, Goran has achieved every feat possible in the sport of free-diving. In doing so he has expanded our understanding of human capability, floating in an arrested state somewhere between life and death. This beautifully lyrical film demonstrates the power of will to transcend its body’s earthly limitations.

Director of photography of fiction, documentary and experimental, feature and short films. First female DOP in the history of Croatian cinematography who made a feature-length narrative film.

Breathing is the greatest physiological and psychological need, stronger than anything else. Apnea is a term for non-breathing, but it is also a sport discipline. I’ve been practicing apnea for five years. My love for this sport and the people who practice it grew rapidly; I was captivated by the unique experience of breath-holding. Making the film My Life without Air is my journey to grasp the motives behind deliberate maximum breath-holding, to the level of almost losing consciousness and voluntarily surrendering to this loss. My Life without Air follows the world breath hold champion Goran Colak’s journey. This film speaks about the liberation of the diving reflex that all humans possess.