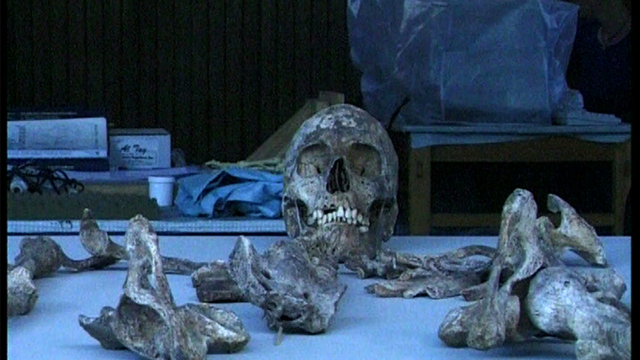 The rule of Guatemala’s new democratic President is still compromised by military officers implicated in the murder of civilians during Guatemala’s civil war.

Elected in January on a platform of 'justice for the disappeared', high hopes have been pinned on President Alfonso Portillo to bring to account those responsible for the disappearances of some 45,000 people. The US-backed Guatemalan government’s 36-year battle against communist guerrillas was one of Latin America’s bloodiest episodes. Today forensic scientists are busy uncovering mass graves. They believe 90% of the victim’s bodies have yet to be found. Esther Derrate follows the scientist’s progress wearing the picture of her disappeared son Pedro. “Since the 15th May 1983 I’ve been looking ... I come whenever they are exhuming in the hope that I will one day find his remains.” Investigations into the disappearances ended tragically 2 years ago when Bishop Juan Gerardi, head of the Catholic church’s human rights office was bludgeoned to death after releasing a report blaming the army for 90% of war crimes. Shocking news pictures captured the murder scene. Portillo has ensured the Bishop’s murder case has moved forward. In a personal interview Portillo rails against the judicial impunity of the military and the powerful: “It’s the worst cancer of this country.” Yet his critics believe he still cannot bring justice for most of the disappeared. General Montt, a notorious military strongman implicated in war crimes, still holds over half the seats in the nation’s Congress. In a recent poll three-quarters of ordinary Guatemalans believed that it was Montt pulling the strings of government. After all it is General Montt’s brother who has been appointed to fill Bishop Gerardi’s position as head of the human rights investigation. After so many years of conflict the people of Guatemala are going to take some convincing before they feel justice has arrived in their country. Produced by Journeyman Pictures
FULL SYNOPSIS
TRANSCRIPT