A visual journey through the mind of an Australian cultural icon 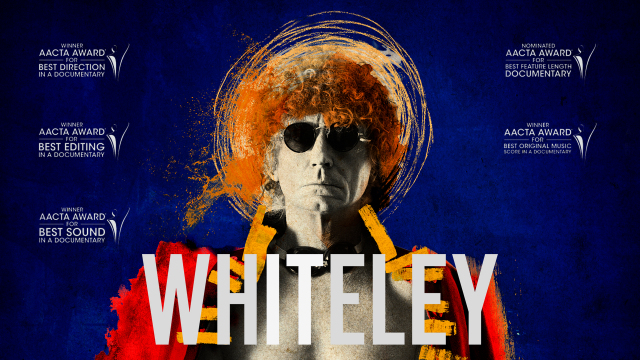 Brett Whiteley is an Australian cultural icon. His brief, dazzling career was as combustible as it was stellar. Only now, 25 years after the artist's untimely death, is his impact on the international art landscape being understood. A visual journey into the private life and creative legacy of Australia’s most acclaimed artist, Whitely offers a deeply personal tour through the mind of a pioneering artistic visionary.

APRA-AMCOS Screen Music Award for best Music in a Documentary

Sue Clothier is recognised as one of Australia’s leading factual production executives and creative producers. In a career spanning more than two decades in the entertainment industry, Sue has produced or overseen the production of hundreds of hours of original broadcast programming.

Sue’s career highlights include the feature docu-drama directed by Gillian Armstrong, Unfolding Florence: The Many Lives of Florence Broadhurst; Australia’s only official selection at the 2006 Sundance Film Festival, the Logie-nominated drama-doc series Darwin's Brave New World, the Walkley-awarded Cronulla Riots: 10 Days That Shocked The Nation and the Emmy nominated Life On The Reef.

James Bogle has co-written and directed four feature films, Closed For Winter (2009), In The Winter Dark (1999), Mad Bomber In Love (1993) and Stones Of Death (1989) and is in development on his fifth, based on the award-winning novel 'Strange Objects' by Australian writer Gary Crew.

James served as a board member at Western Australia’s state film funding body, ScreenWest from 2001-4, and as an Executive Committee Member for the Western Australian Branch of the Australian Directors Guild from 2010-12. James also directs television commercials, teaches tertiary film studies and works as an industry consultant and script editor with a special interest in the development of young and indigenous filmmakers.

Since graduating from AFTRS in 1986, Victor Gentile has worked as a producer, writer and script developer on projects ranging from short films to documentaries, children’s drama, telemovies and feature films. As an independent producer and overseen some dozen television documentary projects including the ABC's Faces Of War series, Megan Simpson Huberman's War Of Distance, Centotaph by Chris Tuckfield, David Caesar’s Convictions, and The Golden Pig for SBS.

He was a founding director of the film production company, Oracle Pictures, and the sound post-production studio, Counterpoint Sound, and was Project Development Manager at Western Australia's screen funding and development agency, ScreenWest. In recent years, Victor has written on children’s TV series such as Streetsmartz, Parallax and Stormworld for Western Australian producer Paul Barron as well as for Electric Pictures developing, researching and writing various TV documentary projects from concept to production. 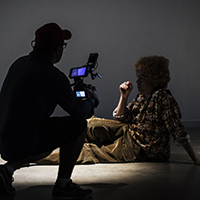 Every piece of the dialogue in the film is authentic – either captured on the archival footage our researchers discovered in all kinds of places, or recreated from notebooks and interviews by our actors who play Brett and Wendy with such perception. The private perspective is so important to this film: the moments of triumph, confusion, achievement and destruction; the intimacy of family moments, the note book entries about personal issues like fear, drugs, anger, rejection, paranoia.
Our archival footage spans over four decades. We’ve become so used to the images of a middle-aged Brett with his halo of red curls and creased face, that it is startling to see and hear the short-haired and intense 20 year old Brett, already on a fast track to art acclamation. Amongst the discoveries in the rushes tins from a 60 Minutes profile from the 1983 is a moving and intimate moment when Brett’s art hero, Lloyd Rees, speaks to him about technique. There is another unforgettable moment on film with the young Whiteley family, including baby daughter Arkie, lazing in the sun at Whale Beach after their return from London.