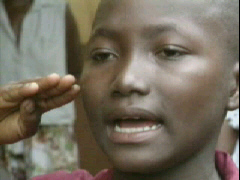 The story of the child soldiers who were drugged with cocaine to make them fight in a war fuelled by blood diamonds, and the child victims of mutilations. Can a permanent world court bring justice to a lost generation?

Sherieff Koroma is today in a schoolroom learning to read and write. Earlier in the year he was living a different life, his nickname was Captain Cut-Hand. After his house was burnt down by the RUF he escaped to the bush only to be found by rebels. They gave him the choice “do we kill you, or do you join us.” He was then drugged up with cocaine and sent out to fight, mutilations became his trademark. With a smile on his face he describes how he earned respect as a brave fighter. “Whenever we attacked we children went first. We were fearless.” With enough drugs, and with no other family apart from the rebels, children like Sherieff were easily manipulated. It is the child fighters who’ve been responsible for the worst atrocities in Sierra Leone. Isattu Kargbo, a girl the same age as Sherieff, recalls the day four boys came and cut off her hand. RUF leader Foday Sankoh vehemently denies his ‘freedom fighters’ are responsible for such mutilations. In an interview here, he blames the Nigerian led peacekeepers ECOMOG, “It’s all lies” he says. The RUF he leads has no other purpose than to sustain itself and maintain power in Sierra Leone. It gathers wealth from the Sierra Leoneon diamond mines it controls. Sankoh believes that “the people were crying for war, and that was answered by God.” Yet the people caught up in the war are sending out different prayers. “Sometines I get an urge to chop off more hands,” Sherieff tells us, “I pray to God to remove this urge. I pray to God to help me kill myself.” A deeply moving report on Sierra Leone’s children of war. Produced by Journeyman Pictures
FULL SYNOPSIS
TRANSCRIPT