An Eye For An Eye In Iraq

In the wake of the violence unleashed by IS, a thirst for revenge has gripped war-torn Iraq 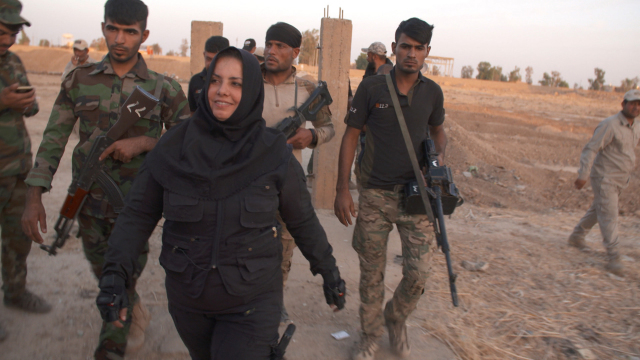 IS cells remain strewn over war-torn Iraq, and it is up to militias to keep the peace. This report follows the first woman in the Arab world to command a militia on her brutal hunt for IS loyalists.

"Look, these are the IS dogs. We will never bury them", declares 40-year-old commander Wahida Mohamed, dressed in black and flanked by armed men in front of the corpse of an enemy. "We treat them as they have treated us", she says, walking off. Ten of Wahida's family members were killed by IS. After her husband was killed in the role, she took over command of an 80-man militia, and has proved a fearsome leader. "I do to IS what they do to me. Eye for an eye, tooth for a tooth. The one who starts pays, the highest price", she declares of IS in a social media post. Without localised militias such as Wahida's, the depleted Iraqi army would struggle to maintain an upper hand over IS. But when reporter Tom Kleijn witnesses the routine handover of IS prisoners from the Iraqi army to Wahida's militia, an unsettling process of interrogation starts. "I don't want to be there if she beats them. No, no, I don't want to be there", says Kleijn, following a mock-execution designed to scare the prisoners. "If I want to, I will kill them for the camera", says Wahida.
FULL SYNOPSIS
TRANSCRIPT