The Ukraine continues to struggle against Putin-backed separatists 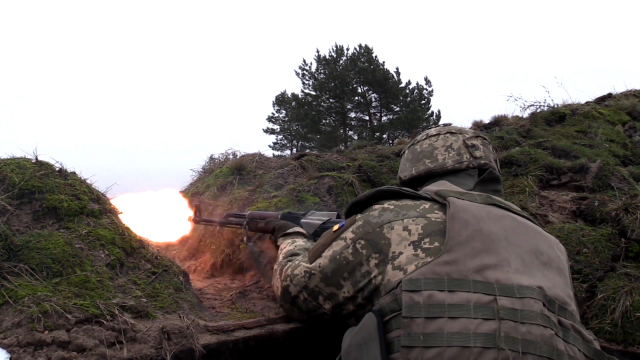 Whilst Kiev remains peaceful, the conflict in the East has killed over 10,000 soldiers and citizens. Ukraine has become the battleground for a proxy war as it attempts to escape Russia's influence.

In recent years, tensions between the US and Russia have risen to levels not seen since the Cold War, with Russian troops occupying parts of Crimea and Eastern Ukraine. The U.S. Ambassador to Ukraine, Marie Yovanovitch, says that Russian aggression stems from their fears over Ukraine's increasing cooperation with the West. "The first move that we saw was men arriving in green uniforms, but no identification." Whilst Russian authorities claim the conflict is a civil war with Russian support, Yovanovitch disagrees; "This is not a civil war. This is part of a Russian disinformation campaign". On the front line of the conflict, near the city of Donetsk, civilians are suffering despite a supposed cease-fire. "We see thousands of ceasefire violations...both sides do keep heavy weapons in areas where they have agreed these weapons, tanks, mortars, multiple launch-rocket systems, should not be", says Alexander Hug, who monitors the conflict for the Organisation for Security and Cooperation in Europe. Despite peace efforts, the US is becoming entrenched in this proxy war, offering the sale of lethal anti-tank weapons to Ukrainian forces in a move that is sure to stoke tensions further.
FULL SYNOPSIS
TRANSCRIPT