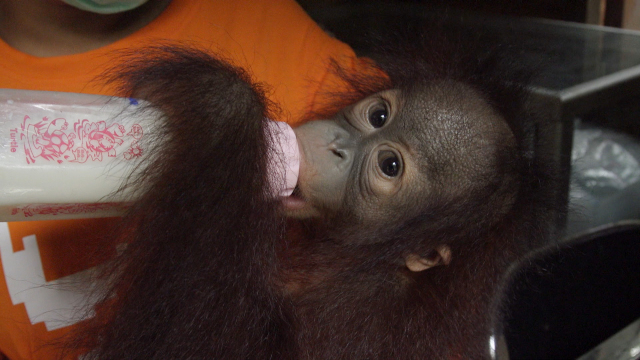 Wild orangutans are expected to face extinction within 50 years. Despite this, the multi-million dollar poaching industry thrives as baby orangutans are captured and smuggled from their rain-forest homes.

“Every time she hopped on a tree we’d cut that tree down. We’d catch the mother in a net and either hit her or shoot her. Once she was dying we’d take the baby”, says an ex-smuggler, describing the brutal capture of a baby orangutan. Intelligent yet relatively passive primates, orangutans are desirable pets, as they can be taught tricks and dressed up. Most are trafficked from the rainforests of Indonesia to Thailand, where they are sold for thousands of dollars. Edwin Wiek runs rescue facilities for these stolen animals, but with little government support he faces significant challenges; “the illegal wildlife trade is very lucrative, a lot of people make lots of money including some politicians or government officials in some cases". For the rescued orangutans, rehabilitation and re-release into the wild is a complex process. Oki, newly released after 15 years in captivity, struggled to adjust to life in the wild according to veterinarian Rian Winardi. “The release didn’t go according to plan. We hoped he wouldn’t turn around and look at people. But he did. He’s an ex-rehab orangutan after all.”
FULL SYNOPSIS
TRANSCRIPT