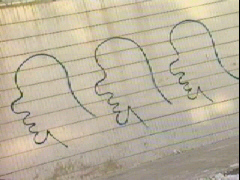 In a modernising spree new developments are shooting up over Beijing. Local opponents to building are making their mark.

In the last couple of years a mysterious series of cartoon-like faces has started popping up all over Beijing. Zhang Dali, a subversive artist, is the culprit. We join him under cover of darkness daubing his trademark faces on every new structure he encounters. This is a protest he explains. "Beijing is trying to change from a not-so modern city to a modern one, ancient things are disappearing, traditions are being lost!" In the thunder of development Dali is secretly and silently making his anger know with his 'art'. Dali believes his graffiti is not simply vandalism, it's an outrage - an affront to the party's need for order. His victims though do not agree. "This isn't art, it's ugly!" Produced by ABC Australia
FULL SYNOPSIS
TRANSCRIPT