Woman In The Line Of Fire 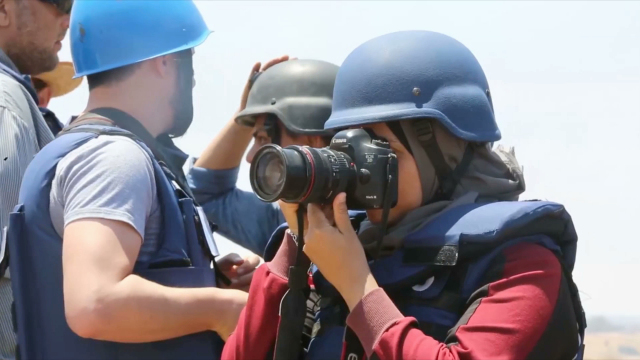 Samar Abu Louf is the only female photojournalist on the Gaza frontline, but has not let this position of isolation prevent her from capturing unique and pertinent images of both war and peace.

“At the start of my career it was difficult because of the way the cameramen and protestors used to look at me disapprovingly”, she remembers. In the beginning, she wore a saucepan and bin liner as an improvised journalist’s attire. “But slowly I managed to prove myself and grew stronger.” She believes that an emotional, rather than impassive, approach makes her photographs all the more powerful. “It affects me a lot”, she says, “And sometimes I photograph them with tears in my eyes.” Most of all, she believes in the importance of striving for freedom, for an end to the conflict. “Freedom means lots of things. To be able to express yourself, to be able to reflect what is inside you.”
FULL SYNOPSIS