Eritrea has suffered decades of violence 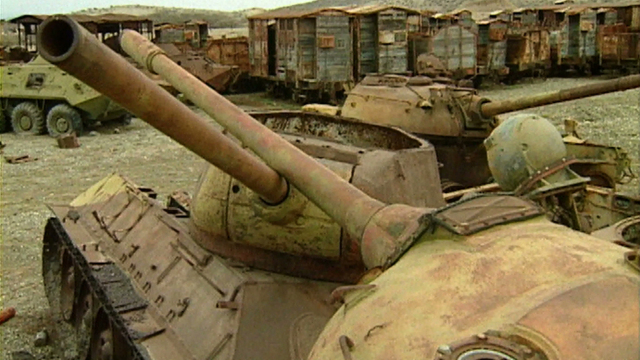 The people of the proud yet small country of Eritrea talk to us about how war with their once-comrade neighbour Ethiopia has shaped an entire generation.

We look at the front line of Eritrean soldiers, men alongside women, defending their border against a one-time friend. Since hostilities broke out between newly independent Ethiopia and Eritrea two years ago, the world has looked on helplessly. Both countries won their freedom by fighting against the harsh Mengistu regime. Why the are now fighting each other is a question few can answer. Ostensibly it is over a small border dispute, but that hardly seems to justify the scale of this conflict. Half-Eritrean, half-Ethiopians do not have an easy decision if they choose to recognise their other half, a woman who lives this dual life tells us. She has chosen to live in Eritrea. Many Eritreans will tell you that "this culture is one of solidarity, peace, and prosperity. We were never a nation of warriors until we were forced to be." The current state is precarious, but the signs of progress are there. You see the pride and determination on their faces to thrive as an independent state. But one major problem lives right next door: is there any hope to making peace with neighbouring Ethiopia? Stunning pictures and intelligent journalism make for a timeless piece on the devastation of war. Produced by SABC Special Assignment
FULL SYNOPSIS
TRANSCRIPT