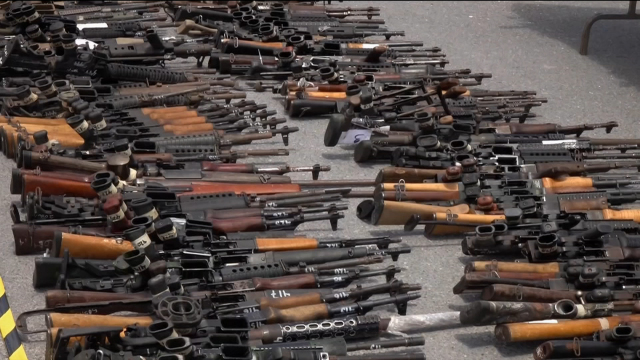 Over 70% of the guns seized from Mexican cartels originate in US stores and were smuggled south over the border. How can this weapons trafficking be controlled – and does the US even want to?

“There are over 5,000 unidentified bodies kept in Tamaulipas, found in mass graves”, says Guillermo, who leads the struggle to identify the vanished people of the Mexican border state. “These are the results of a kind of civil war with no end in sight.” Since 2004, there have been over 150,000 deaths in Mexico’s so-called War on Drugs, most enabled by illegal firearms. Despite stringent regulations, the cartels’ firepower invariably outmatches that of the police. “They have better weapons than we do, with more magazines of ammo”, says one officer. The paperwork needed to buy guns on Texan soil is easily forged, and private sales are even more lax. The trafficking itself is barely controlled, and there is no targeted federal law to punish offenders – the US is far more concerned with the influx of drugs. The long arm of the cartels often means that the border guards turn a blind eye to smuggling for their own safety. “If you don’t play along, they'll just kill you”, says one ex-cartel member. “If you are working at customs, you’re almost certainly getting kickbacks. And if you’re not, you’ll be killed.”
FULL SYNOPSIS
TRANSCRIPT