The exclusive and final unravelling of the Balibo mystery: five journalists were killed during the bloody East Timorese fighting in the 1970s. Only now have the circumstances of their deaths been revealed. 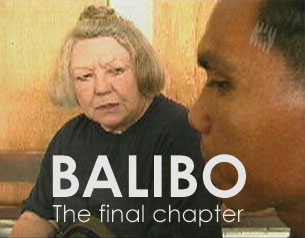 Twenty five years after five journalists, two English, two Australians and a New Zealander were killed while witnessing a covert Indonesian invasion of East Timor, the widow of the reporter for Australian Channel 7 finally finds out the truth. It's the exclusive and final unravelling of a mystery which many believed would never be solved.

The feelings are too much to hide for widow Shirley Shackleton as she walks through the house and stands on the ground where her husband and four other journalists were brutally gunned down. The high-profile case of their deaths has been shrouded in mystery for years. The widow of the Australian reporter, has waited a long time to uncover a much more complex yet believable answer to the case of 5 journalists killed in the line of duty.
Shirley Shackleton has dismissed numerous statements by the Australian government regarding her husband Greg's death. She travels with us to East Timor and speaks to several eyewitnesses who saw them days, even minutes, before they died. Their driver talks about their plans to film the first invasion and their unwillingness to leave the increasingly dangerous area. Tomas Goncalves, one of the leaders of the invasion, meets with Shirley to give her some answers to the final moments of her husband's life. He knows details for which she has waited for a quarter of a century -- including information on the Australian government's support of the Indonesian army.
Despite doubts worldwide the tragic deaths of the journalists were immediately passed off by the Australian government as crossfire casualties. At a funeral three months after they were killed, an Australian government official could only describe Greg Shackleton's charred remains as possibly human. Timorese government officials issued false accounts of heavy gunfire from the house that the Australians were staying in. They insisted the five white men staying in the house were involved with Timores Fretilin guerrillas. Yet Jose Martins, one of the Timorese officials, soon fled East Timor to tell the Australian government that the account was a lie.
In a meeting just days before the guerrillas warned the five journalists to leave, saying, "If you get killed, we are not responsible". But the fact that they were journalists made them feel safe. One precaution they did take was to paint a large Australian flag on their house. Given the close ties between Australia and Indonesia they felt sure the Indonesians would not harm them.
Meanwhile, Tomas Goncalves of the Indonesian army prepared to be hailed as the liberator of East Timor. On October 16, 1975, the day of the journalist's deaths, their house was quietly surrounded by Indonesian troops pretending to be Timorese farmers. The trick may have worked from a distance, but not from a few meters. As the troops approached the journalists probably realised their plight. They came out of their house with their hands in the air.
Any soldier could have shot at the journalists, but according to Tomas, it was the most experienced commander who began to fire. This was Commander Yunus Yosfeah, who went on to become Indonesia's Minister of Information. After Commander Yosfeah started shooting, huge numbers of soldiers also opened fire. It was an awful, unheralded bloodbath which killed the journalists within seconds.
Tomas claims the troops had orders to kill them so they wouldn't publicise what they saw to the rest of the world. The report by Australia's top investigative reporter has been hailed as a controversial and emotional resolution to a historical enigma. Produced by Hobo Media
FULL SYNOPSIS
TRANSCRIPT