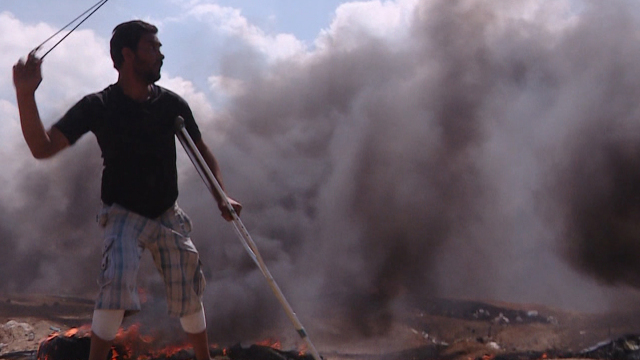 The ongoing Israeli siege inflicts a hidden and unquantifiable toll on the people of the Gaza Strip. Many inhabitants are suffering severe mental health issues, invariably as a direct result of conflict.

Hundreds of young Palestinians gather daily to face off against the Israeli blockade. They are armed with slingshots; the Israeli troops, with guns. “People go there to release what’s inside them”, says Mahmoud, who lives close to the border. “They think: ‘I’d rather die than live this life, this is humiliation’.” Dr Fadel Ashour diagnoses ‘Adjustment Disorder’ as the most common ailment afflicting Palestinians. “People simply can’t adjust to this terrible situation”, he says. Husam is a talented singer and hopes to perform internationally, but was wounded by an Israeli sniper. “They gave me injections of [the painkiller] Tramadol”, he says. “After that I got addicted to it… Nothing made me happy or helped me to forget.” Husam eventually overcame his addiction, but remains traumatised. The siege affects everybody living on the Gaza Strip. 11-year old Shahad is no exception. “My friends and I talk about war more than about childhood”, she says. She has one simple wish for the future. “When I grow up, I don’t want my children to feel as scared as I am today.”
FULL SYNOPSIS
TRANSCRIPT