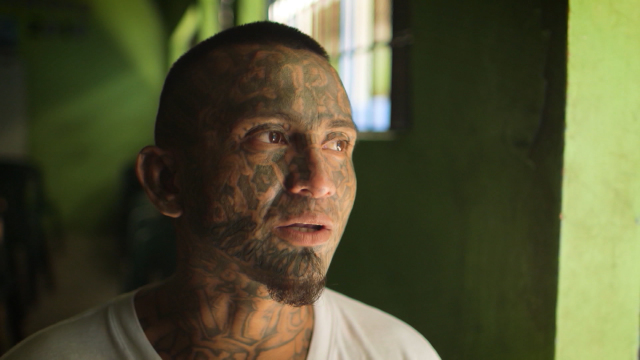 El Salvador has one of the highest murder rates in the world. Whilst perpetual violence is driving thousands from the country, many maximum-security convicts are abandoning gang loyalties for the Bible.

“I believe that people can change because I've seen it”, says Wilfredo Gomez. He was previously a member of the infamous 18th Street gang before being incarcerated. On death’s door with tuberculosis, a Christian told him about the word of God and he accepted it. Now, he is a driving force of the movement within the prison. Marvin Barrera is a more recent convert, only adopting Christianity a month ago when he heard his own family had been killed by a rival gang in retaliation for his own crimes. “I killed a lot of people. They suffered. Now it was my turn to suffer. They wiped out my entire family. And I know that God has forgiven me. I have found peace now.” Yet many apparent devotees who do re-enter the outside world end up back in the gangs. Since Christians are treated better within the prison system, it is difficult to assess whether their faith is true. For Wilfredo, however, there is no doubt, as he opts to remove his gang tattoos – a sure sign of treachery in the gang’s eyes – to indicate his dedication to God. “If I ever go back… they’re going to kill me. This is like a seal on my decision.”
FULL SYNOPSIS
TRANSCRIPT