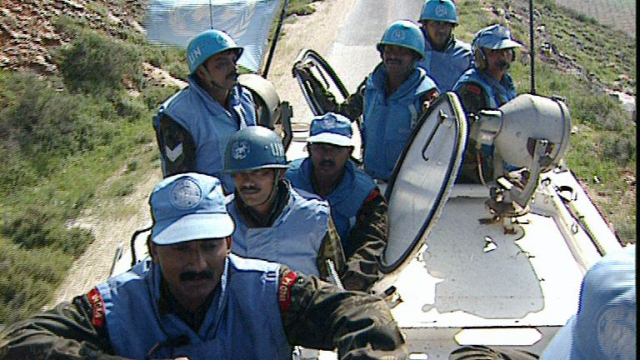 Getting permission from the Lebanese government to enter the occupied zone is very difficult. We take cover each time a plane is heard overhead. Israel rules the area through its proxy militia, the South Lebanon Army. This group of defecting Lebanese, who started as a Christian militia during Lebanon's civil war, has been occupying the southern 10% of Lebanon for Israel for twenty years. Now that Israel has agreed to have completely pulled out by July, the SLA wonders what will become of them. Major Ghattas is one of the almost 3000 soldiers occupying Lebanon's security zone. "I'm not fighting because I want to kill. I want to protect mysef, my family, my village. This is my reason," he tells us. The Lebanese Hizbollah has been responsible for much of the fight between Israel and Lebanon. The occupation should ease the peace process, but the Hizbollah may just continue to war with the Jewish state anyway. Whatever happens, soldiers of the SLA are not welcome back to Lebanon. They are known only as traitors. An eye-opening look at an area where access for journalists is practically impossible. Produced by ABC Australia
FULL SYNOPSIS
TRANSCRIPT