Living In A Cage

A look at the destitute living conditions of Hong Kong's poorest 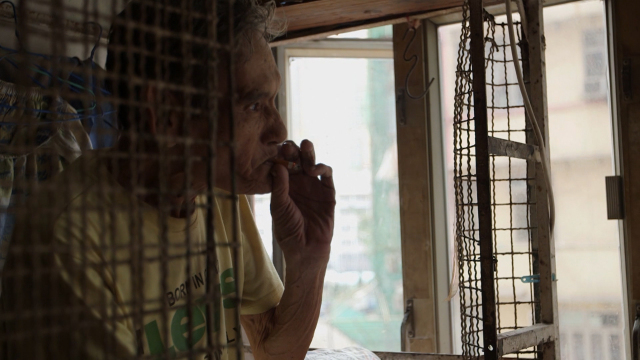 The rift between rich and poor in Hong Kong is profound. Despite being the global capital of the super-wealthy, the premium on space has driven 200,000 people to live in inhumanly cramped conditions.

The average price for 20 square feet of living space in Hong Kong is over $750,000 – one of the most expensive housing markets in the world. Yet much of the city’s wealth is in the hands of its 10,000 super-rich residents, whilst a fifth of the population live below the poverty line. In one small room live ten elderly men, their personal space no more than a single bed encased in a wire cage. Pensions do not exist in Hong Kong, and there is a colossal waiting list for public housing. “It will take 5-8 years for the government to give me one”, says 70-year-old retiree Joe Leung. China’s overbearing control over Hong Kong makes the local government reluctant to remediate the problem. “It’s not a democratic society because rich people have a lot of power”, says social worker Sze Lai-Shan. “Some of them want to control the government.” The shortage of space has led to innovation, with companies specialising in capsule beds for the living or urn storage for the dead making a tidy profit. The region is certainly not struggling economically; it is simply wealth disparity driving poverty. “In Hong Kong we should not have poor people”, says Lai-Shan.
FULL SYNOPSIS
TRANSCRIPT