The failed businessman who took over the Fijian government 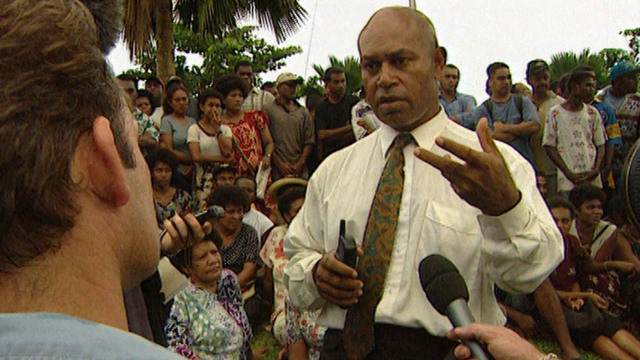 Failed businessman-cum-politician George Speight has been remarkably successful in his takeover of the Fijian government. He has held the small island's ethnic Indian PM hostage for weeks, hailing himself the chosen leader of Fiji's indigenous population.

We get daily doses of Speight's vision of a new Fiji, a "political system that enshrines indigenous supremacy." One of the 30 MPs who was held hostage for 2 days gives us his account of the episode. Each MP was taken to meet Speight individually, and forced to resign at gunpoint. PM Chaudhry has been regularly beaten by Speight's thugs. But is the ethnic conflict the only reason for this violence, or is the battle really over Fiji's mahogany goldmine? We take a look at the real politics behind this former island paradise. Produced by ABC Australia
FULL SYNOPSIS
TRANSCRIPT