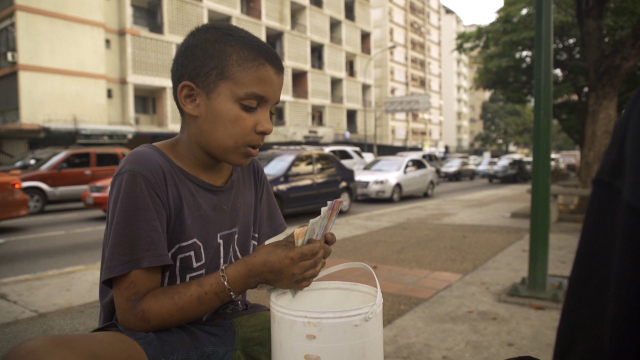 Since Maduro took power in 2013, Venezuela has experienced a major economic downturn. Gangs of impoverished children roam the capital, and women voluntarily sterilise themselves for want of contraceptives.

"I want to buy a hot dog", says 12-year-old Jefferson, counting a wad of cash in Caracas. It's not enough even for a snack. Dozens of children like Jefferson are being abandoned by their parents, unable to afford to feed them. They survive on an average $1 per day, in a country where inflation has reached record highs over one million percent. "Even with the 500 bolivares ticket you don't buy anything", says a destitute young man, sitting by discarded bank notes. Almost fifty Venezuelans have died protesting the Maduro regime this year, with no end in sight. Endemic shortages of power, food and welfare means expensive contraceptives are out of the question for many women. "Since the crisis it is no longer possible to get contraceptive pills", says mother Lolimar. "I'm going to be sterilized", she says, cradling her newborn.
FULL SYNOPSIS
TRANSCRIPT