Fox and the Hound 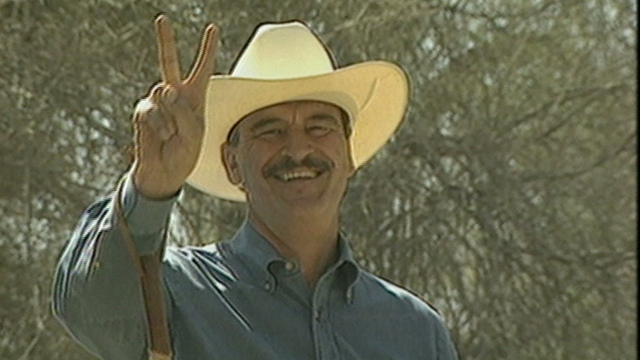 Behind the scenes of elections, we see how the government has historically bought and stolen votes. How and why did the PRI lose, and what made Fox the successful candidate?

The dirt roads in Mexico are filled with noise today, as the country celebrates a time of change. We follow President-elect Vicente Fox on his campaign trail, and see just what the opposition has to say. A Jesuit and Harvard educated ex-Coca Cola executive, Fox isn't your typical Mexican presidential candidate. He easily changes hats, turning in his suit for cowboy gear --to show the people that he too was once a poor boy from the country. For the past seven decades, Mexico has been ruled by the Institutional Revolutionary Party (PRI). Victory for Fox is almost miraculous, given this record and the PRI's reputation for ballot-box stuffing and bribery. "For the vote they offered the people 150 pesos", one poor woman tells us. Quite a temptation for those who have nothing else. In our interview, Fox claims he wants to be the champion of the peasants and Mexico's ruling class alike. He wants "to contribute to change in Mexico, contribute for Mexico to have a democracy." It's been a long, hard fight --three years of heavy campaigning to gain the opposition vote. But you can see that the people of Mexico are ready for a change. Fox is not disillusioned. He knows it will take time to try to fix years of party corruption. But he truly believes that he can do it. Produced by ABC Australia
FULL SYNOPSIS
TRANSCRIPT