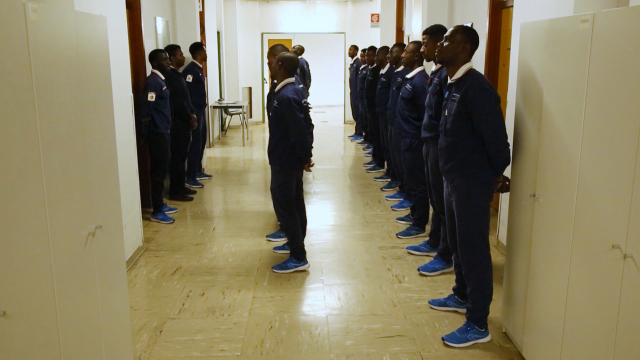 In Italy’s nationalist right-wing heartland, one town is tackling anti-immigrant sentiment with a unique approach: an integration camp. But not everyone agrees with the camp’s prison style tactics.

Academy director Christophe Sanchez looks to instill military discipline in his students. They take classes in Italian language and culture, as well as undertaking volunteer work around the town. Their greatest success story is Sayomba Keita, who has been granted residency. “I would like to have a family and become Italian”, says Keita, now on a permanent contract as a waiter. However, not all students appreciate the academy's militant dicipline. “It’s totally desperate here… we don’t have freedom”, says Abdou Sambou, missing his family in The Gambia. Italy has recently experienced a surge in populist sentiment, spearheaded by the right-wing Lega Nord party, who are often accused of xenophobia due to their stance on immigration. “Trying to defend one’s border is not a crime”, says Party senator Toni Iwobi, himself an immigrant. He insists that the problem lies in illegal immigration. But for Sanchez, a supporter of the democratic party, integrating and not criminalizing migrants is the common sense answer. "If a man speaks Italian, has a permanent job, is financially independent, it would be crazy to take this person and throw them into illegality".
FULL SYNOPSIS
TRANSCRIPT