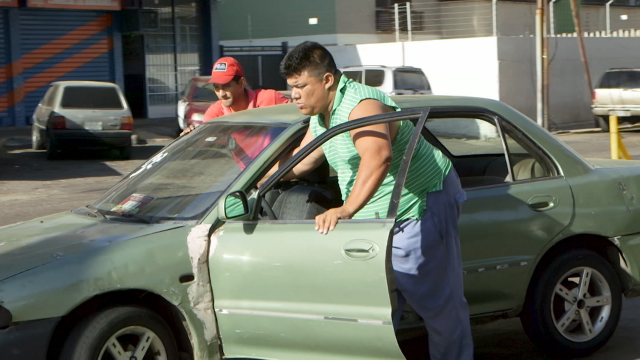 Maracaibo was once the jewel of Venezuela's petroleum economy, drawing companies and workers from all over the world. But the city, along with the rest of the country, is in the midst of a crisis.

The smallest of daily tasks now dominate peoples' lives in Venezuela. Citizens of Maracaibo queue for hours to reach petrol pumps, and often, these trips are fruitless. "I want to explode!" says Eddie Rincon, who waited in line for almost twenty-four hours, only to be told that there was no petrol left. "Can you imagine how I feel? Pained, cheated, and humiliated by all of it". The state oil company Petróleos De Venezuela was once the backbone of employment here, now workers have nothing to do. "The situation is that these guys [Chavez loyalists] have stolen all the money. They stole everything! They destroyed everything", says Larry, a PDVSA oil worker. Under mounting pressure to fix the crippled economy, Maduro has turned to backers in Russia and China for investment in the oil industry. Yet while the US impose severe sanctions on PDVSA, workers say they would prefer for the Americans to return. "Oh, my God! I want them to enter with planes, with F16s, with drones, with everything. I want them to come in force so that they clean everything up, and PDVSA can be reborn".
FULL SYNOPSIS
TRANSCRIPT