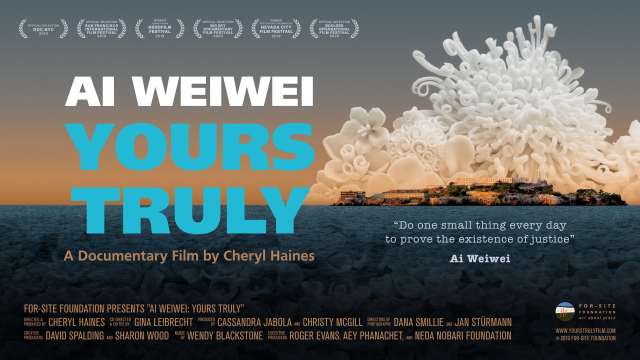 While under house arrest in Beijing, Ai Weiwei remotely transformed Alcatraz, a former island penitentiary and current national park, into a remarkable expression of socially engaged art. The final artwork at Alcatraz, Yours Truly, consisted of postcards beautifully illustrated with the national birds and flowers of the prisoners’ countries. Visitors were invited to write messages of hope to the imprisoned activists featured in the Lego portraits. By the time the exhibition ended, over 90,000 postcards had been sent. Then something even more astonishing happened: prisoners and their families began writing back.
Broadcast cut coming soon Festivals

Nevada City Film Festival 2019 - Winner - Best Feature Documentary Reviews and More
“Powerful... movingly puts Ai’s work into personal context.” – Peter Bradshaw, 4-star review, The Guardian “Powerful... The documentary demonstrates that there is a worldwide network of people… who have taken great risks to make their voices heard.” – Barbara Pollack,ArtNews “An inspiring effort, highlighting the power of the public to make a change in their societies and appreciate the fights undertaken by selfless people in the name of freedom.” – Film-News, UK Read about Ai Weiwei's contributions to tackling coronavirus in – The New York Times 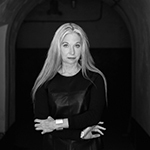 Director Cheryl Haines is the founding executive director of the FOR-SITE Foundation and principal of Haines Gallery in San Francisco, CA. As the curator of @Large: Ai Weiwei on Alcatraz, she was the driving force in securing the location for that landmark exhibition. For over thirty years, Haines has developed exhibitions and site-specific public programs that expose new audiences to contemporary art and advanced the discourse on art about place. Haines’s dynamic curatorial stance presents challenging and provocative exhibitions by artists who explore cultural and environmental issues through a wide range of media, as well as public, site-specific commissions on a national scale. 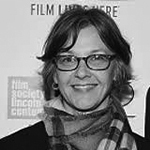 Gina Leibrecht’s career began in 1998 in collaboration with the late, documentary filmmaker and pioneer of the form, Les Blank, with whom she produced, directed and edited the feature documentary All In This Tea (world premiere, 2007 Berlin International Film Festival; Sundance Channel). Gina co-directed Blank’s final work, How to Smell a Rose: A Visit with Ricky Leacock in Normandy (North American premiere, 2014 Telluride Film Festival). Most recently, Gina edited Kevin White’s 2018 documentary Wilder Than Wild (Best Bay Area Environmental Documentary at the San Francisco Green Festival) and Owsley Brown’s award-winning feature documentary Serenade for Haiti (world premiere, DOC NYC, 2016). Past documentary highlights include On Wayang: My Life with Shadows, which she co-produced, co-directed and edited with ShadowLight Productions; and Homegrown Bounty, which she produced and directed for the KQED series SPARK. Gina also edited Frank Green’s Counting Sheep, which aired on KQED’s Truly California series and won a Northern California Emmy Award for Best Documentary in 2006; Karina Epperlein’s Phoenix Dance, which won San Francisco International Film Festival’s Golden Gate Award for Best Documentary Short and made the short list of Academy Award Nominations for Best Short Subject Documentary in 2006; Of Wind and Waves: The Life of Woody Brown, which was nominated for a Northern California Emmy for Best Documentary in 2006; and Kevin White’s A Land Between Rivers for PBS, which won a CINE Golden Eagle Award for Excellence in Film and Television in 2007. 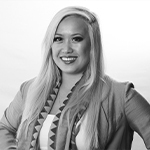 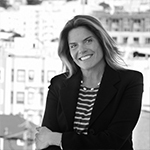 A documentary film producer, creative director, writer and consultant, Christy joined the production of Ai Weiwei: Yours Truly in 2018 as the film moved through mid-late creative stages and into preparation for release. Her most recent project was as producer of Owsley Brown’s 2016 award-winning documentary feature Serenade for Haiti which had its world premiere at DOC NYC, appeared in juried competitions at twenty film festivals and is currently being distributed by GOOD DOCS. Prior, she co-produced Scott Crocker’s 2009 feature documentary Ghost Bird which premiered at HOT DOCS and went on to an award-winning festival run and critical acclaim in the New York Times, NPR, and the Wall Street Journal and distribution on NETFLIX. Christy has consulted on a wide variety of films, advising during pre-production, story development, field production, release preparation, and distribution and promotion strategies. She has helped secure fiscal sponsorship and contributed to the production and promotion of documentary projects that have won a Peabody award, Emmy nominations and been showcased on PBS, HBO, NETFLIX and other broadcast, theatrical, museum, community, education, and digital platforms. 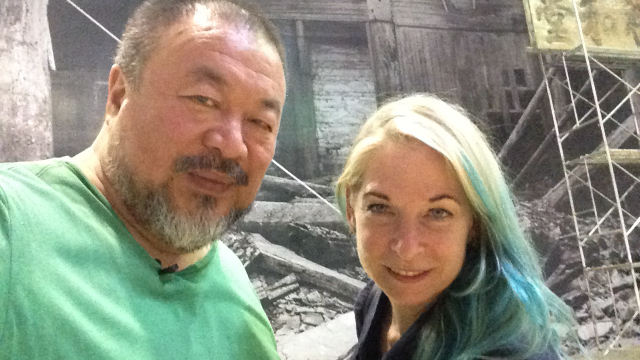 As founding executive director of the FOR-SITE Foundation in San Francisco—a non-profit organization dedicated to the creation, presentation, and understanding of art about place—I have had the privilege of working with dissident Chinese artist and activist Ai Weiwei for over a decade.

During the past decade, Weiwei and I have become friends. In 2011, authorities detained the artist for his public outcries against the Chinese government’s disregard for human rights. I traveled to Beijing shortly after his release to offer support. Weiwei was weary, and described the immense sense of solitude he felt during his 81 days of confinement. It was an experience that would deeply inform his artistic practice. He asked me to find a platform that would bring his work to a far broader audience. In that instant, an idea took flight. I answered with a question: “What if I brought you a prison?”

And so we began working on @Large: Ai Weiwei on Alcatraz, a monumental exhibition of new artworks addressing the struggle for fundamental human rights. From the outset, Ai Weiwei hoped the exhibition could include a call to action. This desire took form in Yours Truly, a project that would invite visitors to reach out to prisoners of conscience from around the world by sending them postcards. It was an effort to abate the sense of isolation that the artist understood so profoundly. At that time, though Weiwei was unable to travel beyond China due to restrictions imposed by his government, he was still envisioning creative new ways to connect and mobilize others on a global scale.

In order to bring Ai Weiwei’s call to action to new audiences, I began working on the feature documentary film Ai Weiwei: Yours Truly. While the exhibition @Large had reached nearly 900,000 visitors, as a first-time director, I was energized by the fact that a film could reach so many more people worldwide via theaters, film festivals, and streaming networks.

Ai Weiwei: Yours Truly tells the stories of several former prisoners of conscience featured in @Large who stood up for their beliefs and, by doing so, have inspired others to advocate for social change. These resilient and relatable individuals include John Kiriakou, a former CIA officer who was imprisoned for exposing the use of torture by U.S. intelligence officers; Ahmed Maher, an activist and co-founder of Egypt’s April 6 Youth Movement, which ultimately overthrew the government; and the family of Ebrahim Sharif Al Sayed, the former Secretary General of the Bahraini democratic reformist party. Weiwei and his mother, Gao Yang, shed new light on a childhood spent in exile and the genesis of the Yours Truly postcards, while interviews with human rights leaders help viewers understand how small acts can lead to significant change. Ultimately, I hope this project will encourage audiences to consider how they might contribute to the ongoing struggle for human rights.