By Rook or Left Hook: The Story of Chessboxing 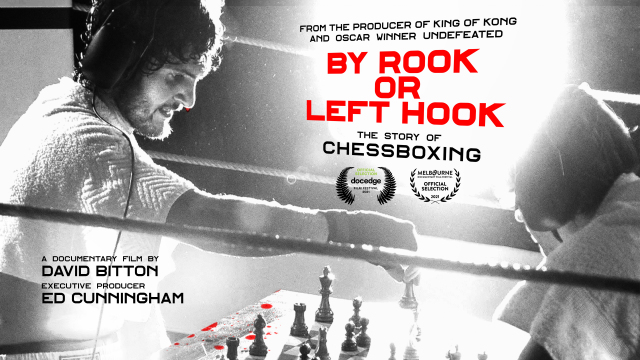 Follow a self-defeating promoter from London and a self-promoting artist from Berlin as they fight for control of professional chessboxing, a sport which taxes mind and body through alternating rounds of chess and boxing. While Londoner and chessboxing aficionado Tim Woolgar toiled away and carried the financial burden to get the sport into the spotlight, Iepe Rubingh, the sport's inventor, used his status to garner all of the media attention at his events. As relations turned sour, Tim cut ties with Iepe and the two squared-off in a behind-the-scenes battle to decide who would become the 'Don King of chessboxing.'
Broadcast hour version coming soon
Festivals

DAVID BITTON - WRITER/DIRECTOR/PRODUCER
David Bitton earned a degree in Film Production at Montreal's Mel Hoppenheim School of Cinema and his professional debut, the 2009 terror short Parking Space, played at over 20 festivals around the world. By Rook or Left Hook is his first feature.

ED CUNNINGHAM - EXECUTIVE PRODUCER
Ed Cunningham spent over twenty years as a sports commentator and has produced several documentaries including the Academy Award winning Undefeated, as well as The King of Kong: A Fistful of Quarters.