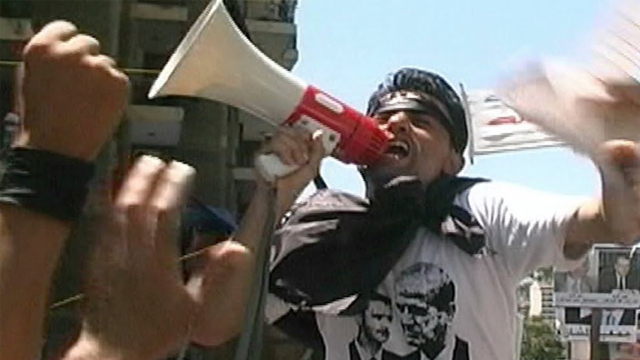 Only after the end to 22 years of Israeli occupation is the impotence of the Lebanese government revealed, and the Syrian agenda made apparent. As Syria's President suddenly passes away and Bashir Al-Assid takes office, shouts for independence fill the air.

We talk to Ziad Abz, a leader of the Lebanon Patriotic Front, about Syrian troops. "Before, they used to give the impression that they are here...to protect Lebanon from the Israelis. Now, there's no more Israeli occupation and there's no reason whatsoever for them to stay." Ziad and 5 other leaders were arrested during a pre-emptive intelligence strike before Israeli withdrawal. Students stood outside and chanted things never previously uttered on Lebanese TV, "Freedom, Sovereignty, Independence!". The authority held by Syrian intelligence extends into every aspect of life for those in Beirut. They have tight control over schools, businesses, media, and the streets. In Beirut alone, there still exists around 35-40,000 official military Syria soldiers and 25,000 intelligence. But the Lebanese patriots continue to fight, recruiting students, journalists, anyone who will help to educate their people about Syria's true intentions. Can Lebanon claim complete independence? Produced by Hobo Media
FULL SYNOPSIS
TRANSCRIPT