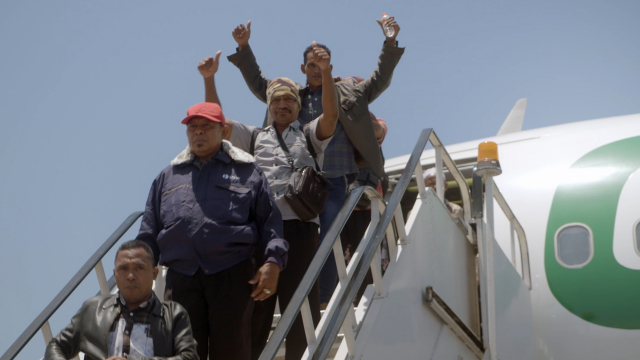 Children kidnapped during Indonesia's invasion of Timor-Leste return to their country of origin as adults for an emotional reunion with the families they were stolen from some forty years ago.

After the Portuguese withdrew fromm Timor-Leste in 1975, the small island nation was invaded by Indeonesia. During the occupation, an estimated 4000 children were abducted and sent to join Indonesian households or drafted into the workforce. 40 years later, the abductees return to their country of origin for tearful reunions with families they don’t remember in a foreign land. ‘It's a way to break a family, break a person, break a society by taking their most loved members.’, says a human rights worker involved in repatriation efforts. Indonesia’s invasion was a violent affair, but what followed was even more sinister, as a ‘civilising’ campaign of cultural erasure saw an organised effort to abduct a generation and raise them according to Indonesian custom. There was a great disparity of experiences; ‘[Some] managed to find a way to be loved or to be fed, to find some kind of education, or to find some kind of work so that they can survive. I think thousands didn't survive.’ Now, the task at hand is to ensure that the story of the survivors’ is told as they lived it, including the moral complexities at hand, as evidenced in Alis’, ‘I feel moved, pained. I'm so grateful that my foster parents' love helped me to get an education and financial support… But for my friends, it's painful to hear their fate, which was so unlike my life in Indonesia.
FULL SYNOPSIS