Hunkering Down in Belarus 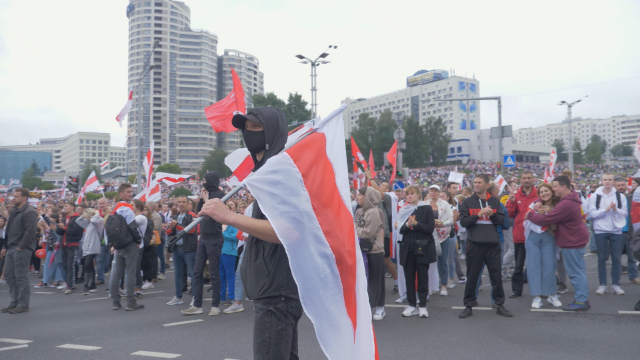 In the wake of Lukashenko's disputed re-election and the ensuing violence, Belarusians speak up and share their hopes for a fairer and freer Belarus.

Three characters in Belarus who strive for honest elections and independence tell of their anger, frustrations and fear. 'What else can we do - keep quiet? Stay at home?' asks one fearful young mother as she prepares for peaceful protests. After the elections high-profile state TV anchor Sergej Kozlovit quit his dream job at what the opposition calls a ‘propaganda channel’. 'My conscience could take no more and I could not continue.' He now creates videoblogs from the demonstrations to criticise the regime. Meanwhile, as the protests continue, another mother who rarely involves herself in politics tells of the violence in the streets that has left her son in intensive care: 'They are not human. They beat a pregnant woman in the stomach.'
FULL SYNOPSIS
TRANSCRIPT