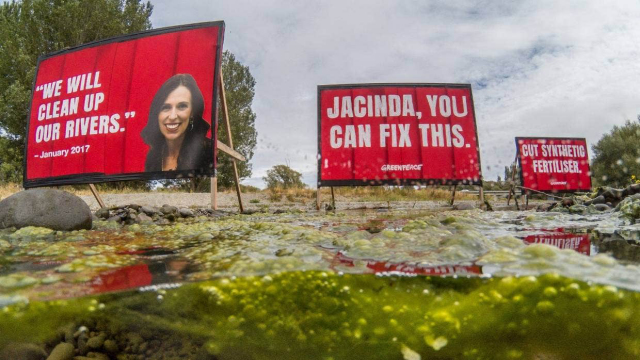 New Zealand is famous for its natural landscapes and pristine vistas. But with farm pollution making its rivers un-swimmable, the country faces a difficult choice between economic growth and environmental conservation.

New Zealand's mountain peaks and rivers have made it a magnet for tourists. But behind this success story lies a shocking reality: New Zealand has some of the most polluted rivers in the developed world. Maori leader and historian Dr Tau says her community has to defend its rivers: 'There's been a failure of government, there's been a failure of the market and the only one standing with any credibility on this is the Maori'. The pollution has been caused by New Zealand's highly lucrative dairy industry. Government attempts to limit the amount of nitrogen they're allowed to use has come under criticism from farmers: 'There is a societal question – do we want agriculture, do we want production, or do we want to get rid of agriculture? It becomes that blunt with those numbers', says John, a dairy farmer. Mike Joy, a freshwater ecologist, says the government will have to make a choice between protecting rivers or the dairy industry: 'That's the reality for much of the world. The type of industrial farming that we do at the moment is harming the environment'.
FULL SYNOPSIS
TRANSCRIPT