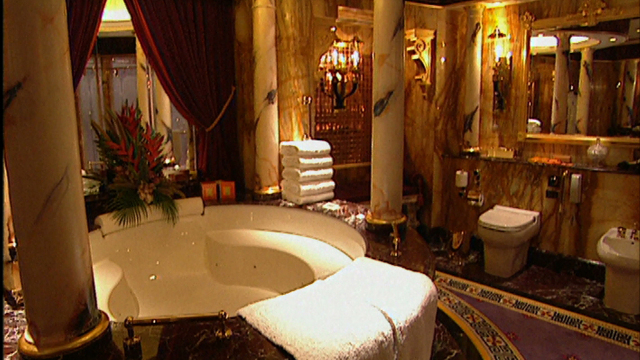 The Burj Al Arab hotel is exclusive in the true meaning of the word. Non-paying guests are charged $100 to simply enter the building. And rumour has it that the next Bond film will be filmed here.

On a man-made island off the coast of Dubai, the Burj Al Arab or "Arab Tower Hotel" dominates the shores of the Persian Gulf. This hotel is so luxurious that a new seven star category had to be applied to match its grandeur. The cost of a room for the night is equally magnificent, running into several thousand pounds for the presidential suite. As tall as the Eiffel Tower and with an interior representing Arab cosmology this is a grand location for the oil Sheikhs to conduct business. Produced by ABC Australia
FULL SYNOPSIS
TRANSCRIPT