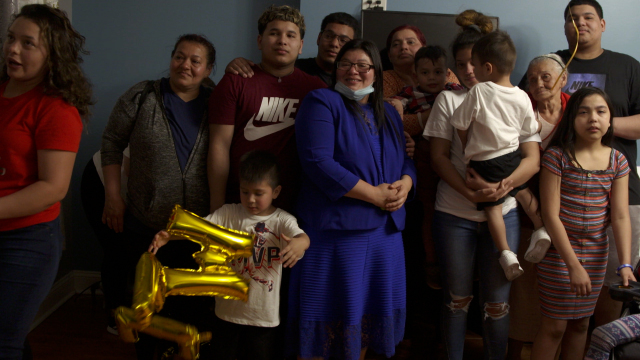 Child separations were one of Trump's most brutal and controversial policies. With some families finally reunited, children and parents are speaking out on their harrowing experiences.

Keldy Gonzalez's children were taken away from her before her deportation to Honduras, under former president Donald Trump's controversial child separation policy: 'they told us, you’re going to go to Luna County prison for five days. And your sons will go to a shelter, and after that you’ll be reunited. It was a lie. A lie they told everybody, to all the fathers and mothers’. Now finally reunited with his mother after four years, Keldy's son Mino still remembers the harrowing night he was taken from his mother: 'they took us to the detention centre, what they called the icebox, but for kids. A man laughed at us and I told my brother to stop crying because I did not want the man to see our pain. The worst thing was the cold, we didn’t have any blankets, they only gave us a mattress, we didn’t have anything to cover ourselves with'. Although Trump's child separation policy was eventually struck down by the courts, its effects still reverberate throughout the U.S. 'You know, I've been doing this work for 30 years at the ACLU. This is, by far, the worst immigration practise I have ever seen and by a long shot,' says lawyer Lee Gelernt.
FULL SYNOPSIS
TRANSCRIPT