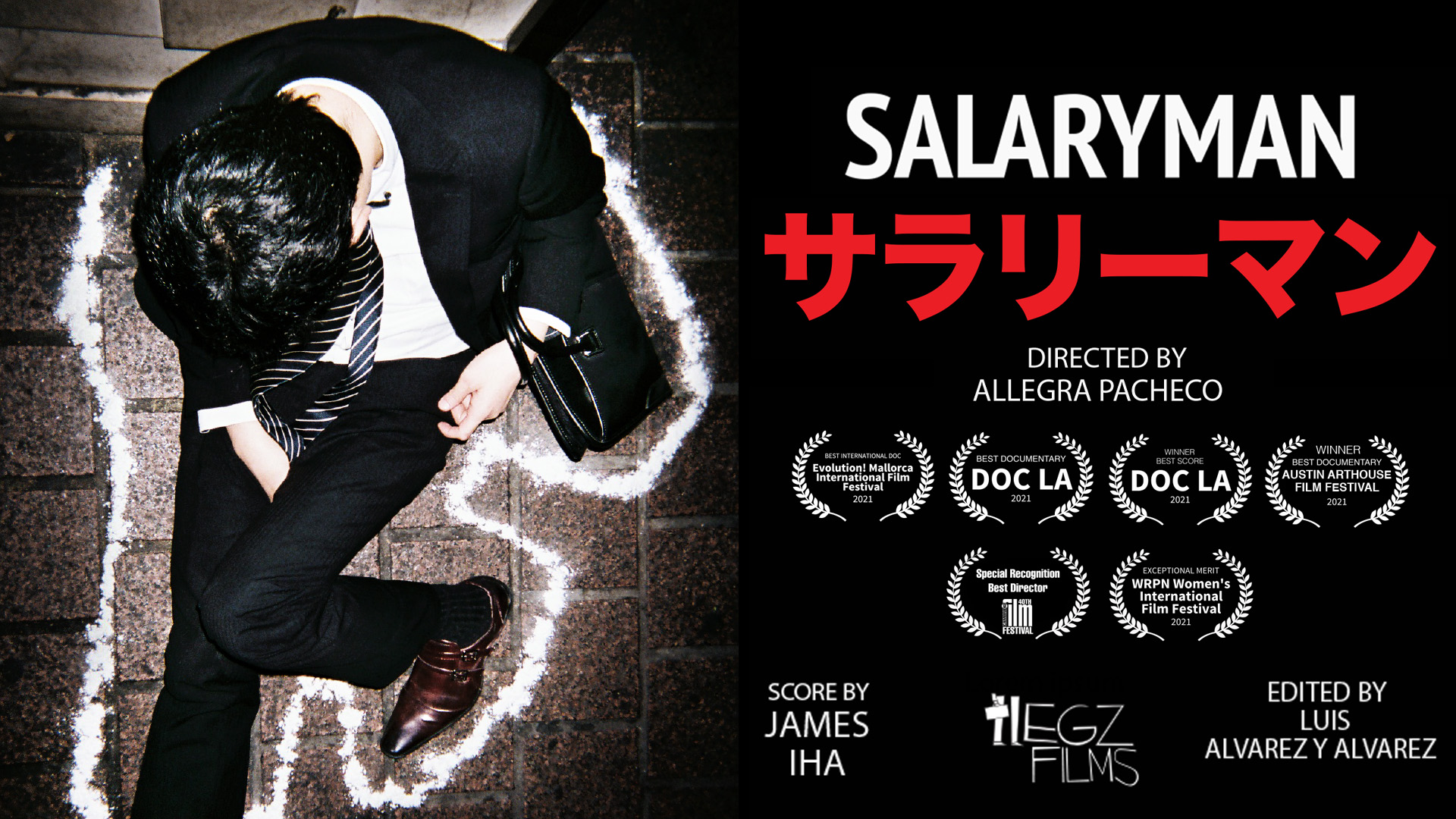 Tokyo work culture's most compelling and complex protagonist; the Salaryman. A nameless, voiceless, over-worked and under-valued cog in the labour pool, expected to compromise home and social lives. Late nights and intense drinking sessions leave many of them passed out in the city streets. This slick, incisive documentary raises questions around the ethics of our global working practices in a capitalist society.

Docville | International Documentary Film Festival 2022 | Official Selection
Reviews and More
'Salaryman is a unique look at life in another country. It explores what makes the country work and the consequences behind the societal structure that makes a country grow.' – Film Threat 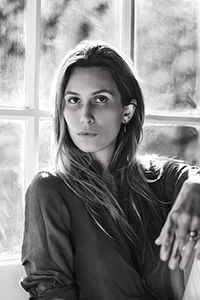 Allegra Pacheco was born in 1986 in San Jose, Costa Rica. A dedicated traveler, Pacheco’s exhibitions span from Japan to Europe and America.
Allegra works in a variety of mediums, which span from photography to painting and installation, and recently documentary film.

In 2012, Pacheco exhibited her first major installation work, 'Boobs', a series of breast-shaped soft sculptures made in collaboration with disenfranchised women from La Carpio, an immigrant neighbourhood in Costa Rica. The exhibition space took on the innocence of a children's playground, but at the same time served as a platform whereby feminist issues and taboo subjects such as sexuality could be addressed in an un-biased environment.
In 2013 Pacheco participated in AIT art residency in Tokyo where she exhibited her work in a solo show in Gallery MoMo and a group show in Yamamoto Gendai, two prominent galleries in the contemporary art scene in Japan.

In 2014 Allegra’s first photography book, titled “88 Days in Japan” was published by Editorial Germinal, making a debut in the Salon du Livre, Paris. 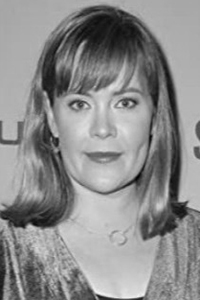 Katie Taber's recent documentary projects include producing Siempre, Luis (HBO Sundance 2020). Credits: Director for Wavelength Productions feature- How to Be Normal, Katie has worked on films for the PBS series FRONTLINE, she was a co-producer on the PBS NOVA series: The Fabric of the Cosmos. Taber also co -producers the Emmy-award winning feature documentary Homestrech. 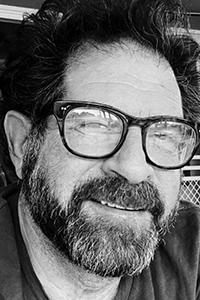 Michael Lustig has over 25 years experience in the entertainment buisness as a manager, producer and consultant, Lustig is known for his work on Icarus (2017), The Million Dollar Hotel (2000), Devil's Highway (2005) and An Ideal Husband (1999). 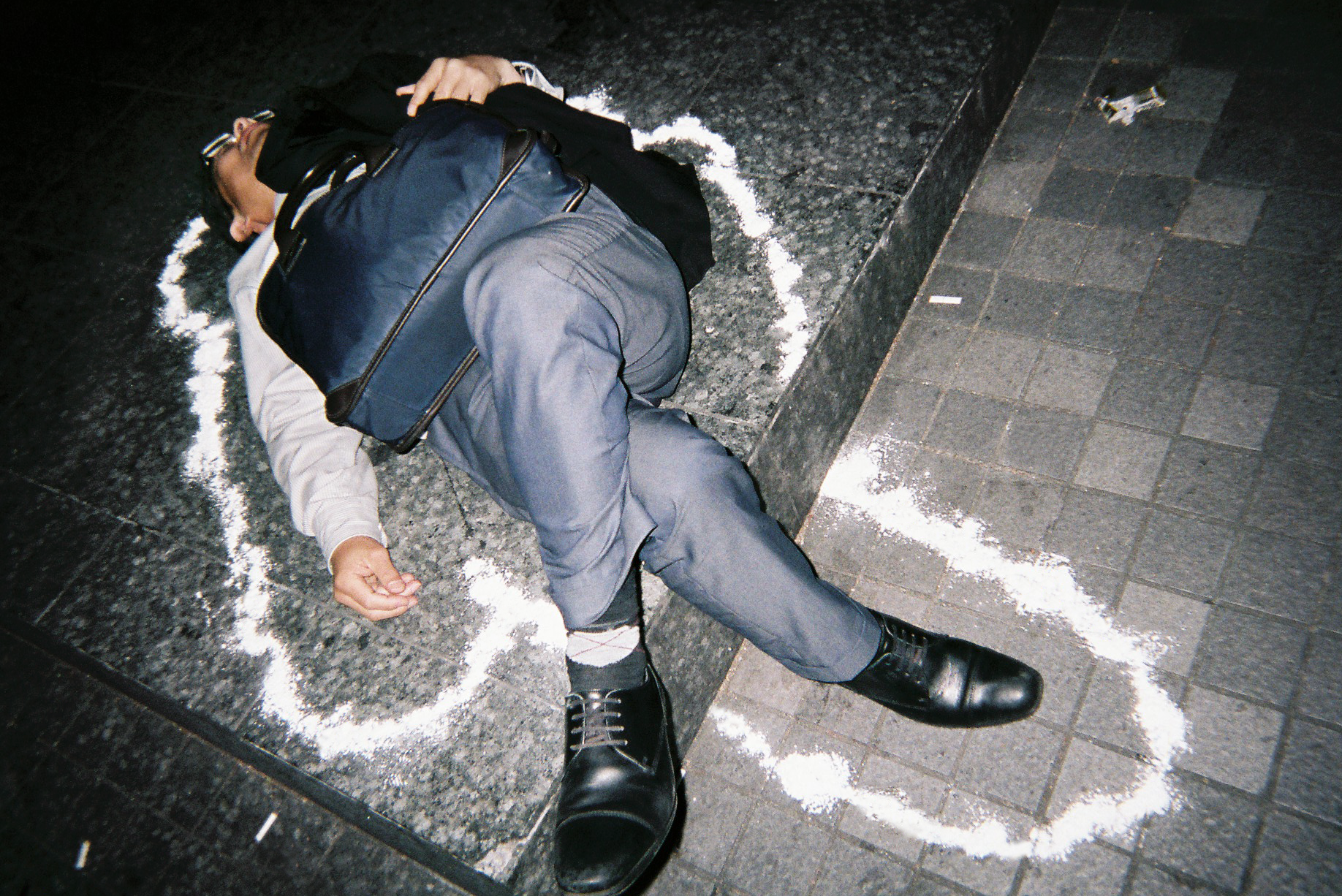 Director's Statement
Growing up in Costa Rica I always had felt I needed to escape the small town I lived in to make it as an artist. I moved to NY to be a photographer, but I ended up making a living in post production for fashion, retouching. Working in an office was the exact opposite of what I set out to do.

After a couple of years, my visa got denied and I was forced to leave New York. On a whim, I gathered all my savings and flew to Tokyo.

I was drawn to salarymen immediately. The way they moved through the city looked to me like an army of men in suits.

I was stunned when I learned it's frequent to see salarymen late at night sleeping on the sidewalk. When I first saw these men in suits just lying in the street, for a second, it looked like a murder scene. Like a corporate murder.

Upon asking the locals, they shrugged it off and pointed to the fact people get drunk and miss the last train. Though this seemed like a sound enough explanation, I felt there was more to the story. I thought it was really interesting that it was common. And that it was so common that nobody found it interesting. Somehow, I saw something of myself in them that reminded me of my work in NY… But I couldn’t quite place it because we’re so different...

At that point, I was already documenting salarymen in my street photography but I decided to take my investigation further. I wanted to get to know them better. So I shifted my focus to interviews… and not just after work, but in their homes, and in their lives.

By combining my photography/art background, and taking a leap into the unknown territory of filmmaking, I wanted to paint a broader and deeper picture of salaryman life.

I was obviously an outsider, but I was interested in what we had in common, especially how work had shaped our lives.

The first time I saw a salaryman lying on the street, I projected onto him all sorts of meanings.
As often happens with documentary film "the truth" is seldom a fixed conclusion, there are no concrete answers, and the investigation ultimately leads to a journey of self-discovery. Through documenting salarymen and pressing to understand their lived experience, I was able to find answers on a personal level. Learning from others, investigating our differences and similarities is rich territory for dialogue. Since we spend most of our lives working, understanding the nature of what and what it does to us and to our families, is an important place to start. If we are unhappy with these answers we can then ask ourselves how we are willing to enact change for the better.

We are all salarymen in one way or another – that’s the truth.

A valuable lesson I learned in making this film was that when things feel dark, when we start to lose ourselves along the way, there are exits all around us, we just have to look for them.