An imaginary or real-life paradise? 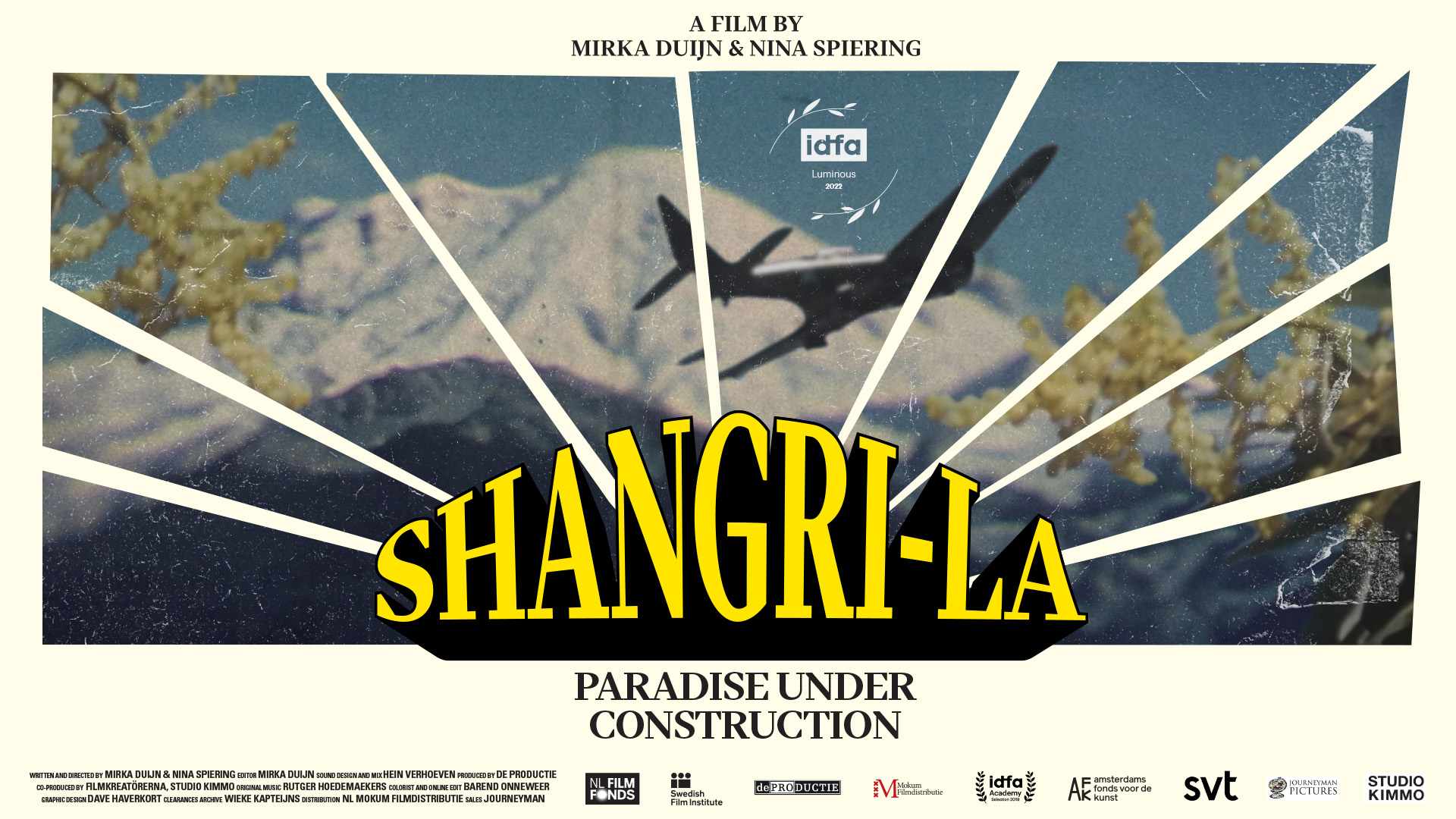 In this essayistic travelogue, Mirka Duijn explores the history of the image of Shangri-La - the famous, imaginary paradise from James Hilton’s novel, ‘Lost Horizon’. Two decades ago, a Tibetan region in China, Deqin, claimed it was the original Shangri-La of legend. This rich and complex story follows Mirka’s quest to find answers, only resulting in an entanglement of facts and fictions, truths and lies. 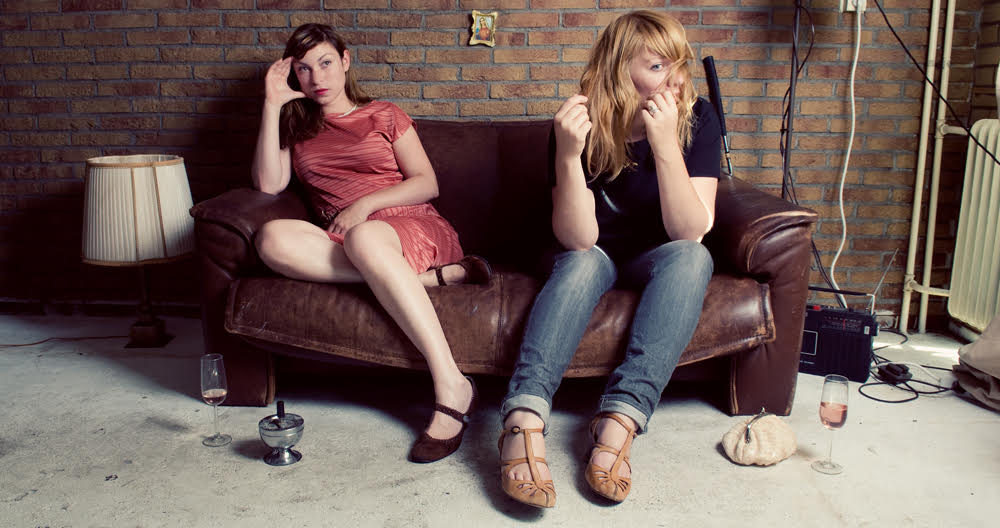 Tourist-gaze
Tourism. This film started with something about tourism that bugged us for a long time, something we have always felt uncomfortable about. We were that kind of tourists that call ourselves ‘travellers’, when backpacking to places no one has ever been, real authentic places, that we then ‘discovered’ all by ourselves... But when being at those places, drinking tea at an ‘authentic Tibetan family’, for example, the setting felt just wrong, off. Our hosts explicitly catered us with the authentic experience we longed for: They prepared our food as they thought we liked it best, and wore the clothes they thought we would find nice and authentic. They staged the setting according to what they thought we wanted to see of their lives.

We started to feel uncomfortable taking pictures of such events. Because, when we would take a picture of this situation, what would it be proof of exactly? What would we really be showing our friends back home? Is it a picture of something real or of a facade? Or is it simply proof of an economical transaction, or even mutual exploitation, of power relations gone wrong? This was why we initially started to explore this topic. Our question: what are the consequences of our visit and the photo that we take back home as proof of this visit?

Sociologist John Urry, specialised in tourism, describes the dynamics between host and guest as a result of the ‘tourist-gaze’. This tourist-gaze is not neutral, it is framed by our pre-set ideas about the places we visit: Exotic Bali, Peaceful Bhutan, Burgundian France or Romantic Venice… These are images that we know from glossy vacation brochures, TV programs, and pictures shared on social media by friends. Dream images. And it is exactly this image that is being catered to us by locals and entrepreneurs. Thus our desire has an influence on reality, shaping it, moulding it into a new reality.

For that reason the image we finally take home to show others is a valuable commodity, and thus carefully marketed. It can even be a useful tool for propaganda, especially in places where identity politics are at stake. Countries sell themselves as, for example, a successful country, a peaceful country or as a peaceful Tibetan paradise... This way, tourists and even tourists-filmmakers like me taking pictures there, become co-creators of the place’s political image. Which means that, thinking of that tea with the Tibetan family again, both the host and me are being used.

This is nothing new. In his book 'Orientalism', social scientist Edward Saïd describes the same use of (our) images for propaganda in the context of colonialism. Landscape paintings have always been seen to be in close relation to colonialism and orientalism a century ago, its purpose being to frame the other, to simplify the image of the other, in order to be able to dominate it more easily. It seems that the tourist image is the kitschy descendant of these paintings, used in a similar way.

In Shangri-La, the confusing chaos I ended up in was carefully staged, using the scenic landscapes and a local culture for a clever marketing campaign. The way the story of Shangri-La was implemented was just as clever: Combining hard facts with spectacle, after which smokescreens are thrown up, deliberately creating confusion with ambivalent stories to finally spin these around in an echo palace of multiple voices; stories endlessly repeated, distorted, retold, and revived in the dynamics between residents, tourists and filmmakers like us. Finally an ambivalent story is created which is neither true nor false anymore. The result: We don’t know what is real or not and we will never know. So we simply choose to reproduce that image for which we came, that image that we already know from the brochure...

Western-Gaze
This film, for us, is all about the influence of the Western-Gaze on this place, the tourist-gaze being an extension of the colonial-gaze. From the gaze of the British explorers who visited the place over a century ago, via the fictional novel, Lost Horizon, in which a Western fantasy image of the place is being created, to the gaze of present-day tourists and filmmakers like us. We think it is important to understand how something that seems so innocent as taking a tourist snapshot, or asking for (and retelling) a story, can have such a huge impact on other people's reality.

As a Western filmmaker, Mirka most obviously also is a part of the dynamics of the Western-Gaze. When Mirka was filming there, she asked for the story, and everyone told her the story she wanted to hear, shaping it to her liking. The motivation of the interviewees: They hoped it would be good advertising for their town to be in a film, attracting more Western tourists. Mirka has been struggling with her position being so compromised, and the power relation between the interviewees and her being so difficult. Both when filming there, as well as when we were writing the narrative.

When filming there Mirka tried to work with people in ways that the collaboration would be more equal, but the bottom-line is that it simply is not equal. We have different (power) positions and different aims, and we can’t avoid getting caught in these dynamics.

We have been at a point at which we questioned if we could make a project like this at all, being Westerners. But we think it is important to do so. We decided that this film should be precisely about me being part of these dynamics. This film, my story is not only about the imperialistic narrative that has been put forward, but also how my story is caught up in it, I am caught up in it. We want the audience to become aware of that. I want them to question my position, and with that their own position as image-making tourists. That is why we chose to write this story from Mirka’s perspective, showing herself, struggling with her position as a Western filmmaker.

We think it is really fascinating that in this place, Shangri-La in China, it is still so easy to peel off the layers of the stories that have been stacked on top of each other. By peeling off the layers of fact and fiction, truths and lies of the place, and thus by constantly shifting perspective on the revival of Shangri-La’s myth, we hope to playfully give an insight into the dynamics of the tourist-gaze, thus hopefully training a critical eye on tourism, media, and even filmmaking itself.