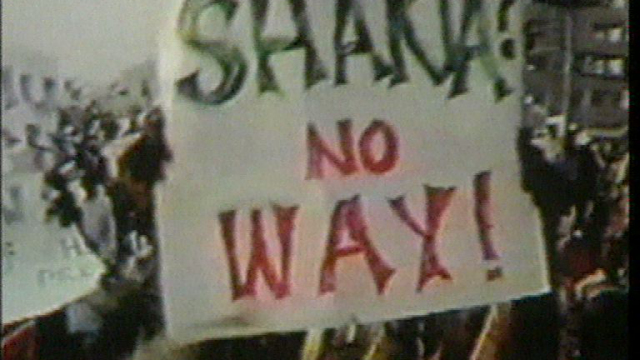 A healthy man is about to have his hand amputated for stealing cattle. He is the first person to be punished under Sharia law now sweeping across the Muslin north of Nigeria.

Newly released after 15 years of military dictatorship, both Christians and Muslims in Nigeria are embracing their separate faiths with a renewed vigour. But amidst the prayers for paradise, violence has erupted twice this year, leaving more than a thousand people dead. Religious pogroms now threaten to engulf Africa’s most populous nation. The Christian South blames the Muslim north for imposing Sharia law. Sharia is the strict Islamic code embracing medieval punishments like amputation, stoning and beheading for breaches of the Koranic code. The Governor of the northern state of Zamfara believes Sharia will solve many social problems; “there’s virtually no crime – It’s crime free” he says proudly. Drastic measures have proven hugely popular in a nation ridden with corruption. Indeed, many say Nigeria’s civil conflict is as much about politics as faith. There’s the old rivalry between the three major tribal groups, a widening gap between rich and poor and a struggle between those who support democracy and those who prefer the bad old days of military rule. Produced by ABC Australia
FULL SYNOPSIS
TRANSCRIPT