The traumatic story of the 40,000 North Koreans living illegally in China. 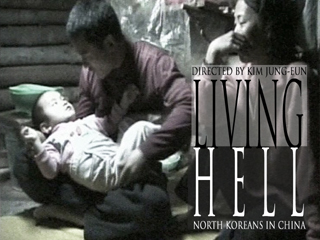 We follow one North Korean family who have escaped from a labour camp and are desperately trying to be re-united with their children. They tell of appalling beatings at the hands of guards and of the starvation that drove them to abandon their children in China. A harrowing depiction of life in North Korea from the award winning filmmaker of Shadows and Whispers.

We return to the tragic story of the Kim family - forced to give their children up to orphanages to escape hunger and the deprivation of living beneath the ground. Seven months after we last met them, the Kims were arrested thanks to an informer and forcibly returned to North Korea. Now they hide in a shed after escaping prison and fleeing once again to the mountains of North East China. They tell of appalling beatings at the hands of the North Korean prison guards. Their escape has brought them one step closer to a reunion with their children, but they must leave the safety of their hideout and return to the city where they were captured. Min-Ho and Hyung-dong are children who sleep in an abandoned construction site. They risked life and limb to escape North Korea. When they were caught their punishment for abandoning the motherland was transfer to a North Korean labour camp. There they faced a hunger that made them faint. They know if they are caught smuggling money back to their families this time they will be sent to political prisons - from which they will not emerge alive. They wrap money in plastic to swallow it to smuggle it back home. We travel with them as they prepare to cross the border back into China. They risk their lives to go back - the embodiment of this harsh existence. Su-Hee and Han-jin make their living weaving baskets for an underground aid organisation, and send money back to their little girl in North Korea. "She's probably forgotten what we look like". Tired of crying, they now believe the best way to help their daughter is to make money for her. "The sun will shine for us some day". They don't answer knocks at the door. In a rare glimpse of life on the other side of the border - North Korean women wash seeds in the Tumen river. All who flee the famine must swim these waters. On the banks of this river human traffickers prey on young women, kidnapping them and selling them as sex slaves. Sun Ja is one of countless North Korean women bought by Chinese. "When you're desperate you're not easily scared", she says of her escape by jumping from the roof. The Kims are offered a filthy shed to live in, close to the orphanage. There's a hole below ground in which to hide if necessary. Meanwhile their three children await their parents' arrival. It's nine months since they saw each other. The children are better nourished than ever before and are learning to read. But they are silent at first - barely recognising their parents. They tell their children of the beatings they got in jail. "We escaped just because of you!" they plead. In their final few hours together they find a peace they may never know again. A reunited North Korea may one day relieve them all of their anguish and fear - but it's not happened yet. Our films ends as Min-Ho and Hyung-dong wait for darkness to fall to slip past the border guards. It's an ending full of fear. For these boys, as for so many others, the nightmare goes on. Produced by Jung-eun Kim
FULL SYNOPSIS
TRANSCRIPT