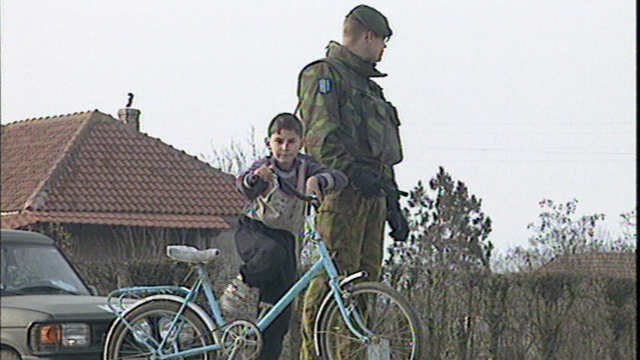 The Ashkali are accused of collaborating with the Serbs during the ethnic cleansing, disposing of bodies after massacres. Today, following bomb attacks against them, Ashkali children go to school with a KFOR escort.

There is also tension between moderate Albanians and hard-liners who still want revenge on Kosovo's Serbs. KFOR protects Serb enclaves, and Serbs complain of ghettoisation: "The Albanians believe that KFOR are here to protect them and they can take every liberty". The moderate Albanian mayor of one village, having suffered two bomb attacks, admits <"Of course I am afraid". Meanwhile, the Kosovar Albanians have got neither jobs nor independence, and unfortunately for most, the radicals are setting the tone. Produced by ORF
FULL SYNOPSIS
TRANSCRIPT