Islam & America - Through the Eyes of Imran Khan

Why do so many Muslims hate the United States? What has America done to alienate so many people in the Muslim world? Imran Khan addresses some important questions. 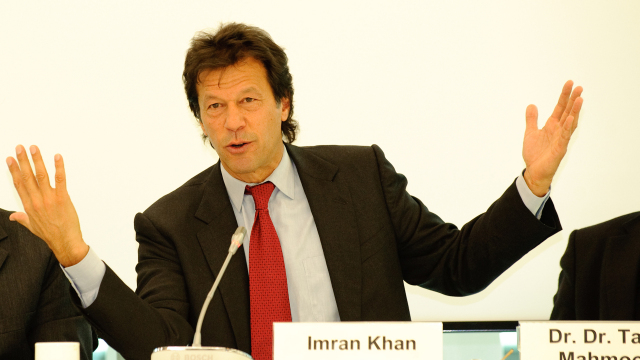 Why do so many Muslims hate the United States? What has America done to alienate so many people in the Muslim world? These are the questions that former Pakistani cricketer turned politician, Imran Khan, tries to answer in this latest offering of the Unreported World series.

At Islamabad’s Women’s College, a concert for peace is taking Place. The students are mainly from privileged, middle-class backgrounds. If you were looking for Muslims that sympathised with the West, this would be the first place you would go. But even here, amongst the more liberal, “Westernised” Pakistanis, anti-American feeling is riding high. “It’s as if one white life was far more important than thousands of black or brown lives,” comments one young, educated, middle-class woman. “They feel they can basically come in, use as they please, and then, when they want, they can just walk across the border, go somewhere else, and do exactly as they please there,” complains another. The underlying feeling here is clearly that the US only cares or acts when its own people are at risk. If these liberal, cosmopolitan women feel this way about America, how must those who do not benefit from the Western way of life feel? In Peshawar, close to the border with Afghanistan, anti-war demonstrators fill the streets. They are driven by a sense of justice that is a fundamental aspect of the Koran. America may be the most powerful country in the world, but the feeling here is that this does not give them the right to act as judge, jury and executioner. As far as the international press is concerned, there is a lot more mileage in stories emphasising the extremes and differences between cultures, instead of what they have in common. The result is often a misunderstanding about the true nature of Islam. People in the United States tend to equate Islam with Fundamentalism, but, for many Pakistanis, Islam gives them a direction in life, helping them to come to terms with their harsh, often poverty-stricken reality. In this part of the world, the spectre of the IMF looms large. Even the poorest street traders in the country’s capital, Lahore, know what the IMF is, and who is at the helm. “The IMF is America. America tries to control our economy through the IMF,” comments one shopkeeper. Pressure from the IMF has forced the government to raise utility rates frequently, with devastating results. It is in the impoverished rural communities that the effects are most clearly perceived, with many unable to afford food and basic health care. As the state system crumbles under the pressure of its debts, the vacuum created has been filled by others. The poor are turning to the religious schools, or madrassas, which are often breeding grounds for a more intolerant version of Islam. Unsurprisingly, their influence is strongest where neglect and poverty are most pronounced. The attacks of September 11 were universally condemned throughout the Muslim world, but America’s reprisals against Afghanistan have changed everything. The fundamentalists now occupy the centre-stage. How did Islam get hijacked in this way? Is it only America to blame, or have the values of Pakistan’s ruling class also played a part in fomenting resentment against the West? This fascinating and highly resonant report goes a long way towards explaining the problematic nature of the relationship between Islam and the West. It is a schism that developed long before the bombing of Afghanistan, and is likely to take even longer to heal. A report by Imran Khan for Unreported World. Produced by Mentorn
FULL SYNOPSIS
TRANSCRIPT