A secret propaganda video has emerged documenting the existence of terrorist training camps for children in Sudan. 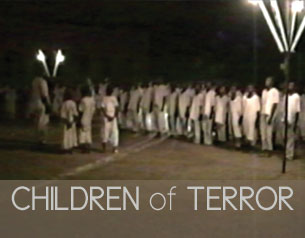 Exclusive! A secret propaganda video has emerged documenting the existence of terrorist training camps for children in Sudan.

"Look at the faces of these children... these are faces of the future of Islam that the West fails to see and the West is afraid of". The English voice-over on a fundraising video describes hundreds of children marching in a regimented style at an Islamist training camp. "Some of the Koran devotees in Sudan are only 4, 5 and 6 years old," it goes on. "How this puts us adults to shame". At camps like this across Sudan, children are trained for war against the West. Eye-witnesses report pre-pubescent youths target training with AK-47 machine guns, negotiating flaming obstacles and climbing walls. "They were conducting training to a very high military standard", states Lutfallah Ahmed Afifi, former head of security at one such camp. "The level of training was equal to that of Western military. I feared for my own life". Every day the children chant mantras claiming they are arming themselves against America. The children come from across Africa - Kenya, Nigeria, Chad - as well as Sudan. Most were captured and forced into the camp. "Without a shadow of a doubt, the children were brought there by force", recalls Lutfallah. "Those who ran the camp had told the families that they would take care of the children and pay the family money". Rapes and beatings are commonplace. Slavery in Sudan has a long tradition and is well documented, but this is a different form of bondage. Worse still, there is evidence that the children are also being schooled in the use of basic battlefield chemical weapons. Lutfallah initially thought he was guarding an Islamic madrassa. But when he oversaw Government officials arriving to a secret laboratory even he wasn't allowed in, he uncovered a terrible secret: "They bring teams of specialists from the Government Military laboratory - they come to teach the children in the use of unconventional weapons". There is no doubt these camps are known to the Sudanese Government, and despite assurances given to the West, Sudan is still supporting terror to serve its own interests. Ali Osman Mohammed Taha, serving vice president and main negotiator with the West on anti-terrorism matters, openly declares his war on the US to congregations of Muslim speakers. "This is going to be an open ended battle between us and the USA... an ongoing struggle" he is filmed saying in the Sudanese embassy in Malaysia. "The struggle will continue no matter how much it costs." Taha goes on to explain how the Government facilitated the entry of Jemaah-al-Islamiya to attract Islamic and Arabic money into Sudan.

"The regime is not working for the welfare or interests of the Sudanese people", explains Abd'ul Aziz Khattab, the man who filmed the speech and who defected his position with the Embassy to expose the actions of his Government. Sudan may be pretending to support the War on Terror, but the kidnapping, brutalising, brainwashing and militarising of children indicates their real intentions are quite different.

Hannah has worked as a producer in both documentary and drama over the last 10 years. She has worked on documentaries for BBC, Channel 4 and Channel 5, as well as documentaries and news items for foreign distribution to the Netherlands, Germany, France and Spain. This work has covered many diverse topics and involved filming in difficult and dangerous countries such as Burma, Nagorno-Karrabakh and Sudan. She has worked on feature films and produced 8 short films to date for BBC, Channel 4, Film Four and Scottish Screen.
Hannah won a BAFTA in 2000 for Best Short Film. The film Home has won 13 other International Awards. Damien has produced material for flagship shows including C4 Dispatches, BBC Correspondent, for ARD, ZDF and PBS. He has developed a reputation as a specialist in popular human rights, humanitarian and environmental stories  covering many of the worlds war and disaster zones. Damien has also produced more adventure and people/wildlife oriented shows for the likes of Discovery and National Geographic. In recent years he has branched out into more creative writing  including non-fiction true stories and feature film scripts.