Your husband has been brutally murdered by your neighbours. How do you respond? Scottish nurse, Lesley Bilinda, is still asking that question. She is determined to track down and meet the killers of her husband who disappeared during the Rwandan genocide. 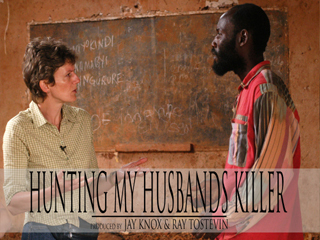 As the Hollywood film 'Hotel Rwanda' hits the cinemas, we bring you a startling new documentary from Rwanda. Imagine. Your husband has been brutally murdered by your neighbours. How do you respond? Scottish nurse, Lesley Bilinda, is still asking that question. She is determined to track down and meet the killers of her Rwandan husband, Charles, who disappeared during the 1994 genocide. As she prepares to return to Rwanda, her mind is full of questions. Can she find Charles' killers? What will she do if she does find them?

"I met Charles when I was working as a nurse in Rwanda," confides Lesley Bilinda. "We married in Rwanda and wanted to spend the rest of our lives there." But their life together was shattered as genocide swept the country. In a hundred days of violence, around a million were killed. On the 21st April 1994, at the height of the Rwandan genocide, Charles Bilinda was abducted. He was never seen again. Ten years on, in a new atmosphere of openness, some of the killers are coming forward to confess their crimes. "I just assumed that it would be completely out of the question ever to trace the person who killed Charles," states Lesley. "Suddenly, to realise there is a possibility has made me face something I never had to face before." She decides to return to Rwanda in the hope of finding her husband's killer. Her search begins at the guesthouse where Charles was last seen. The guesthouse's manager, Paster Kabarira, is believed to have colluded with Hutu rebels and is now in prison. He claims to have watched Charles being taken away from the Guesthouse by a man in military uniform. With the permission of prison authorities, Lesley meets him. But he refuses to admit he did anything wrong. "If I had colluded with the militias, I would admit to it and ask for forgiveness," he states. "I know I've done nothing wrong and the people who are saying I have are lying." The meeting leaves her frustrated and upset but she refuses to give up. Lesley decides to visit the Murambi Genocide Memorial site to confront for herself the scale of the genocide. Her guide round the Memorial site is Emanuel, one of just four survivors from a massacre which killed 50,000. "There's a room here full of kids," she sobs, confronted by the sight of human bodies on open display. The full horror of the genocide - and Charles' death - brings Lesley to her knees. Leaving Murambi, she travels on to Gahini, the village where she and Charles lived. As she arrives in Gahini, she learns of a local man, Gasto, prepared to speak about the killings. But as they talk, it becomes clear that Gasto was one of the men who murdered her best friend, Anatolie. "We sliced her neck. She died instantly," Gasto confesses. They also attacked Anatolie's young child with a machete. "Part of me felt disgust that he should be there and involved with it," she rationalises. "But part of me also felt, I suppose, pity for him." Knowing that killers are confessing to their part in the genocide, Lesley renews her quest to find out more about Charles. But Lesley's journey tests her Christian faith to its limits as she uncovers some unexpected and unpalatable truths about her husband......
FULL SYNOPSIS
TRANSCRIPT

Ray Tostevin, Co-producer/Director
During a working trip to Rwanda, Ray was shocked by the many stories of personal tragedy he heard and started to explore ways of filming the personal impact of the 1994 genocide. He discovered Lesley Bilindas story through press cuttings on her book The Colour of Darkness. He has an extensive background in news and documentaries and was a founder member of ITV West's documentary series, West Eye View. Jay Knox, Co-producer/Director
Jay, has been producing news shorts concerning developing world issues for several years and was keen to direct a longer feature which brought African issues to an international audience. On meeting Lesley with Ray she was impressed by Lesley's passion and love of Rwanda, and her willingness to confront the past. The film is Jays documentary Directing debut, she also filmed 2nd camera along side DOP Phil Knox.

The film set out to express a very personal view of the impact still felt by the survivors of the Rwandan genocide. Hunting My Husbands Killers is the story of one British widow, Lesley Bilinda, and her search for the people who murdered her Rwandan husband. By focusing on the story of a mixed marriage, it brings to an international audience the humanity we all share both in the rich north and developing south. In Lesleys search for truth and justice she finds some resolution for her grief, but, like most Rwandans, she lives with the fact that justice may never be done and the killers will remain un-convicted.