Nabila is a Muslim woman and popular political rapper. In a Swedish white, male dominated society, she's determined to make her voice heard. But Nazi threats and cultural stereotypes stand in her way. 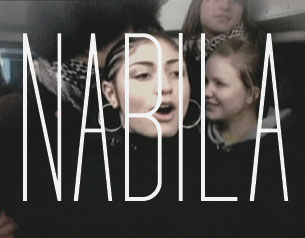 Nabila is a Muslim woman and popular political rapper. In a Swedish white, male dominated society, she's determined to make her voice heard. But Nazi threats and cultural stereotypes stand in her way. Juggling family demands with her burgeoning career and university degree, she straddles a delicate line between two cultures. With both energy and charm, this classic documentary portrays a young woman coming-of-age.

"Nobody today looks at the potential of immigrant women," complains Nabila bitterly. "They're like nothing, like the gravel under your shoes." Even as a rapper, she constantly finds herself discriminated against because of her sex. "I'm never considered a good rapper. Just a good girl rapper," she laments. "You keep getting reminded that you're 'just' a girl." When Nabila first arrived in Sweden, she was ostracised and bullied because of her race. But her early experiences at school fuelled her sense of injustice and inspired her first rhyme. "Punches at school made me sore; I was a virgin - they called me a whore," she raps. Since then, she hasn't looked back. She regularly performs to packed crowds and has been adopted by the Communist left. Her songs are passionate rallies against everything from the Iraq war to racism. But her high profile has made her an easy target for Nazis. "Someone saw me on tv and got hold of my number." she confides. "They said they were from the Swedish National Front and told me to expect a bomb in the mail any day." The call frightens her but she feels more sad than angry. "I'm disappointed in the human race. How can they hate me - someone they don't even know?" The discrimination she encounters only made her more determined. "If people say I can't talk because I'm an immigrant, I'll throw my Swedish passport at them. If they say I'm uneducated, I'm reading for a degree." Her family also puts pressure on her to succeed. "You've got to be better than the Joneses next door," lectures her father. "You've got to struggle harder than them." As the eldest child, there's additional pressure on Nabila to do well. As her father tells her: "I want your brothers and sisters to see how well you've done so that they will want to be as good as you." But rapping and family life leave her with little time to study and her degree starts to slide. "I sleep on the sofa, that's how crowded things are at home. Studying at home on the stairs is not easy," she explains. Her tutor wants her to move into student accommodation and focus on her degree but her family won't allow it. "I know that school can help me get out in the long run but sometimes I don't look ahead. I have to concentrate on what's happening tomorrow or in an hour or this evening." After falling behind in her studies, her teachers force her to drop down a year. Her parents are bitterly disappointed but Nabila has other concerns. She's been asked to perform at an anti-fascist rally which is likely to be targeted by Nazis. "I'm very nervous but if I stop working against racism, the Nazis would win," she reasons. As she approaches the stage, she passes a young man who's already been attacked. The streets are packed with masked men. "I thought they were going to kill me. The shock hit me afterwards," she recalls. But she forces herself to get onstage and perform and gets out of the rally unscathed. As the child of two cultures, Nabila was always going to face unique challenges. But she approaches them with such courage that you cannot help but be impressed. As her father boasts, "Nabila is a fighter. She has really accomplished something." Prix-Iris at Prix Europa in Berlin 2004 Doc:U at IDFA Amsterdam 2004 Ikaros, Swedish public service 2005
FULL SYNOPSIS
TRANSCRIPT

Some years ago Håkan Berthas and Hanna Heilborn made a documentary about the rapper Big Mike. They ran into the young hip-hop girl Nabila who hung out in the crowd around Big Mike. Håkan and his friend Johan Bjerkner soon noticed that Nabila had story of her own. This resulted in yet another film, this time about Nabila's fight against the constant threat from patriarchal traditions and racism. Nabila is a girl who has the guts to stand up against men, Nazis and anyone who do not believe in her. "Nobody shall silence me!", she retorts. Nabila is a remarkable, strong, courageous young woman who knows what she wants and keeps on fighting for respect and personal space. This charming movie of Håkan Berthas and Johan Bjerkner do not avoid the difficult questions many confront.