Inside the Child Sex Trade

A confronting and harrowing expose of young children lured into a life of prostitution. 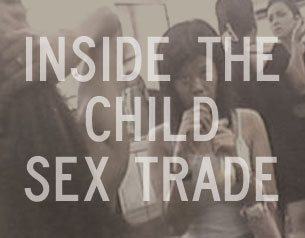 The plight of child sex slaves has been well publicised but seldom do we get to see inside their nasty world. Recently however, an undercover film crew did just that. They gained rare access to Diana and Lina, two teenage prostitutes at a brothel in Batam. Focusing on the girls' plight and the mission to save them, they filmed every event leading to the girls' rescue. It's a confronting and harrowing expose of young children lured into a life of prostitution.

A young girl cowers in fear outside a brothel. Diana is so traumatised and crying so hard she can barely talk. She's just been reunited with her family after being sold as a sex slave. Now, she's terrified of their reaction. Inside the brothel, a Mafia don is negotiating with the pimps for Diana - and her friend Lina's - release. The girls' enslavement is finally coming to an end. "Batam is a city built for wealthy tourists from overseas," states social worker Ramses scathingly. "It's only used for sex tourism and gambling." His organisation, PRAI, tries to rescue trafficked children. But it's an endless task. There are an estimated 7,500 child prostitutes here. The brothels are run by gangsters and the government refuses to even acknowledge the problem. But if politicians won't help rescue children like Diana and Lina, fellow prostitutes will. The rescue mission got underway three weeks ago when Tia, another worker at the brothel, agreed to help. "I always thought it was strange seeing those two there," she explains. "They're too young." She agreed to act as a link, passing on messages from PRAI to Diana and Lina. Diana and Lina have been working at the brothel for eight months. "When they were brought to Batam, they didn't know how old they were, whether they were ten or fifteen," states Ruli, the PRAI worker assigned to their case. "But what is clear is that they had not begun menstruating." She takes us to meet the girls and tries to persuade them to escape. But while Lina is willing to go, Diana refuses. "She's afraid her father will kill her if he finds out she's been doing this kind of work." Ramses is desperate to rescue the girls but they're too frightened to go. "They want their parents to come and get them. They don't trust anyone else," Tia explains. Her information also reinforces the urgent need to get the girls out. "They did something to Lina to make her menstruate. Her period lasted a month," she confides. There is concern the repeated rapes have caused the girls serious injury. Ramses locates the girls parents but now that things are moving ahead, he's increasingly worried about the rescue. "If we're discovered, they might be hidden away or even killed." To minimise the risk, he's asked a businessmen from the girl's home island with links to the Mafia to help. Finally, the moment arrives and the men leave for the rescue. The girls' future hinges on the success of the mission. They know nothing of the rescue plan and are shocked to see their family. While they are consoled, the businessman negotiates their release. The pimp continues to maintain the girls were never coerced. "They came of their own free will. No one is being sold here. They came by themselves." Free at last, Diana and Lina are taken straight to hospital. They both test positive for venereal diseases. They also start to tell their story. The traffickers promised them jobs as street vendors in Java. It was only when they arrived that they discovered what they would really be doing. "They said we wouldn't be selling snacks, rather we would be selling our c*nts," Lina recalls in shame. The girls return to their village but Ramses remains concerned about their future. In the words of Lina: "We're damaged goods now."
FULL SYNOPSIS
TRANSCRIPT

Olivia Rousset has been reporting for Dateline since September 2000. She began her career in television at the age of 10, when she won Best Costume on Flappers Funtime Show. Rousset moved to Sydney from Perth after winning ABC TVs Race Around the World in 1997. Since then she has worked as a freelancer, directing projects as diverse as documentaries for the Discovery Channel in the US, music videos and a number of television commercials. In the realm of current affairs she has made stories for the ABCs Foreign Correspondent and the 7:30 Report as well as producing and filming a feature for Channel Nine's Sunday program. Rousset's reports for Dateline include an exploration of The Earth Liberation Front and the home front of the war on terror in the United States, and Waiting to Die which examined the origin and consequences of the longest running hunger strike in history  carried out by members of Turkeys outlawed communist parties. Last year Iraq, Sweet Iraq saw Rousset spending several weeks following an Australian Iraqi back to his birthplace for the first time in 25 years. Gaining unique access to the very heart of the new regime in Baghdad, Rousset closely documented Hassan Janabis early days working with the Americans as he tried to find his place in the New Iraq.