History for the Future 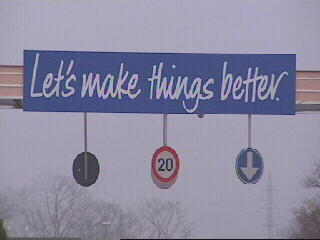 Why is China swallowing up millions of Western jobs? How can Beijing compete so successfully on the global market when all around Europe, manufacturing plants are closing? The Phillips factory in Hasselt once employed thousands of people. But as the market shrank, they started outsourcing jobs further East. We follow laid-off worker Carine to China and Eastern Europe as she tries to find out why her job disappeared.

"The law of the jungle prevails. Only the shareholders count," despairs an angry worker. She lost her job when the local Philips factory closed in 2002. Now, she's gathered to watch a video of the factory's closure with a group of old colleagues. "If you fall behind in this race, you plunge into the red in no time," reasons Philip's President, explaining to his employees why their factory had to close. But they seem unconvinced. Among the workers is Carine, whose anger at her treatment by the company is visible. We follow Carine to Budapest where she visits the workers now doing her job. But the trend of downsizing seems to have spread here as well and there is no guarantee of the factory's future. A small union has been set up in the company but it is scantily supported. One of their few members admits their limited role: "Most of the workers have a temporary contract If they are dismissed, we can't have much say in that." The lack of a European economic policy means that ultimately the workers have no external support. It is in Shanghai where we find the stronghold of Phillips production. Here workers are paid as little as 70 Euros per month and live in factory owned dormitories nearby. But should wages be forced up, the company director is already planning more relocations: "We will move on again, further into China or to Vietnam...it's a never ending process." What Union presence there is in China is strictly controlled. Strikes are illegal and Chinese law stipulates one Union per company, which translates to only an 'official union' being available. A representative of one such Union describes the difficult balance of working for both employees and the company. The result is the largely held perception by workers that: "Union and management look after the same interests." Whilst wages in the Phillips factory are low, their provision of basic welfare support is nonexistent in many other factories in China. A textile factory worker laid off after its recent privatisation receives no benefit payout. Such conditions mean China is ripe ground for profit-motivated companies, as a Belgian worker laments: "We are competing with countries without social security... They aim to keep the standard of living down." A huge surplus of migrant workers in the city means that the power of companies to exploit workers remains strong. In a global economy, the issue of the Chinese workers movement is one that affects workers all over the world. If China is the factory of the world, as yet it is one without unions or acceptable conditions for the majority of its employees.
FULL SYNOPSIS
TRANSCRIPT