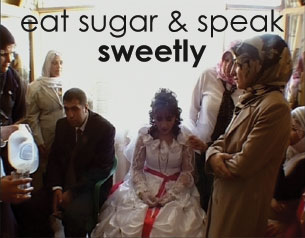 This week's shocking documentary uncovers the scale of forced marriages in Europe. Ayse was just 11 years old when she became engaged. Regularly beaten and raped, she was forced to work as a slave for her husband's family. Her story is not unusual. In the Turkish immigrant community, arranged marriages are routine. But now, women are starting to defy these traditions and tell their stories.

A young bride watches the guests dancing. It's supposed to be the happiest day of her life but she looks utterly wretched. When she thinks no-one's looking, she wipes away a tear. Her real fiancee died a few weeks ago but - determined the wedding should still go ahead - her family are marrying her to her fiance's brother. "Smile! It's your wedding", whispers her relative. "Show them how happy you are." "Eat sugar and speak sweetly is a Kurdish and Turkish saying", explains Turkish author Fatma. "It means only talking about nice things - not mentioning what's really happening." Like many Turkish women, she was engaged to a distant relative. But unlike them, she ran away shortly before the wedding and published a book criticising forced marriages. "In our culture, they say women are men's honour", explains 17 year old Sultana. "When I turned 12, I was no longer allowed to go outside and play. I couldn't enter the room when we had guests - all these restrictions." At 14, she violated the boundaries set by her parents by falling in love with a friend. Her parents repeatedly beat her. Driven to desperation, she took an overdose. "Thank God, I'm still alive. But then I knew I didn't want to live like that any more." By running away, Sultana has shamed her family. "My father isn't a real man anymore because he hasn't got his family under control." She lives in fear that her family will take revenge by murdering her. "My mother told me stories about a women who ran away with her boyfriend and had children. When the parents found out, they took the children away and killed them both." Since fleeing a forced marriage, Fatma has dedicated her life to helping other victims. "I've spoken to many, many women and they told me how terrible the first night is," she states. "You're nervous and afraid and there's pressure to prove to your mother-in-law that you're still a virgin. This pressure makes the first night very, very painful." When a young girl marries, she immediately becomes the property of her in-laws. "They expected me to cook and completely care for them. I had no right to rest", describes Saniye, forced into a violent marriage with a distant relative for 12 years. "The mothers-in-law are so harsh with the brides because they went through the same thing. That's the tragedy of these women - in getting a daughter in law, they finally gain authority", explains sociologist Necla Kelek. But as traumatic as these arranged marriages are, they're not the worst type of forced marriage. If a woman is raped, she disgraces the family honour. Only her death, or marriage to her rapist, can remove this stain. "It happens to many, many women", states Fatma. It happened to her mother. "Six, seven men tied my arms and legs and took me away", she recalls. Fatma has never forgiven him. "My father raped my mother so she had no chance to go back." Attitudes are slowly changing. In Turkey, the prospect of EU membership has led to new laws given equal rights to women. But for countless women, it is too late.
FULL SYNOPSIS
TRANSCRIPT